Kim Sagwa’s Mina is a finalist for the 2019 CLMP Firecracker Award for Fiction, with winners announced June 5. 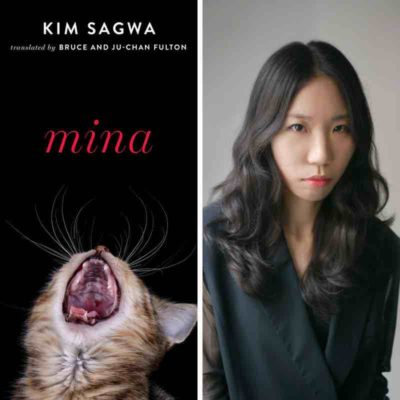 While we await the winners of this year’s CLMP Firecracker Award for Fiction, we want to give you another chance to read about the book, masterfully translated by Bruce and Ju-chan Fulton.

Mina tells the story of Crystal, a teenager who toils day and night to earn top grades at her cram school. This book is dark and visceral, and if you haven’t already started reading it, check out this mesmerizing excerpt in Granta, which begins with a dream and turns into a waking nightmare.

Originally published in Korean in 2008 by a then twenty-four-year-old Kim Sagwa, Mina has been hailed as “a powerful portrayal of teenage angst.” But in addition to its rich characters, Mina demonstrates Kim’s ability to portray scenes with such haunting and precise language, beautifully rendered by translators Bruce and Ju-Chan Fulton.

Kirkus writes, “Kim’s prose is focused, sharp, and unflinching, even—and especially—in the novel’s gruesome scenes. We see the color of blood mixed with milk, for instance. It is ‘the color of strawberries.’ The novel is full of such vivid details, difficult to read and more difficult to forget.”

Writing in the Seattle Review of Books, bookseller Caitlin Luce Baker called Mina “one of the rawest and most honest depictions of what it’s like to be a teenager” that she’s ever read.

According to The Brooklyn Rail, the “strong characterization of these two troubled young women makes for a compelling and deeply disturbing read.”

Copies of Mina are still available, get yours now!