CAT Book Club: The Order of the Day 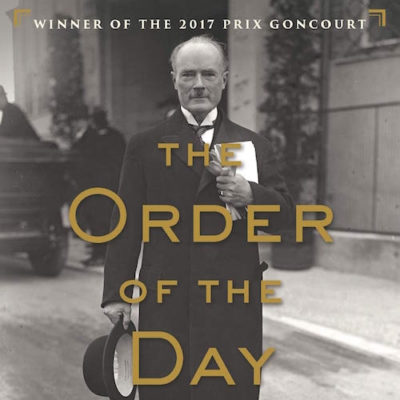 French author Éric Vuillard won the 2017 Prix Goncourt for his novel L’Ordre du jour, now available as The Order of the Day in Mark Polizzotti’s translation.

In an interview Vuillard explained, “In my staging of the historical events I didn’t invent a thing. The more you get into details, as in a ‘zoom in’ in a film, the more you reduce the pomposity of famous historical scenes, and in that way they become more genuine.”

While staying true to the details of history, Vuillard told the New York Times that he considers the book a novel “because there is not such a thing as neutral history.”

A review in The Millions describes the book as “a stark examination of the price of silence, the cost of sticking to the rules to keep the peace, and the human toll when ruling elites not only go along to get along, but support the ravings of a violent and vengeful leader” and goes on to Vuillard’s recent work “a clarion call to our current era.”

When the topic of the recent French election came up, Vuillard discussed how his book had been used as a lens through which to view the candidacies of Marine Le Pen and Emmanuel Macron, though he hadn’t quite intended it as such:

I didn’t intend to criticize specific candidates, but I wanted to emphasize the weight of financial power. The victory of the Nazi Party in March 1933, a month after the meeting with the business moguls who agreed to contribute to the election campaign, was no coincidence, but it’s impossible to claim that the money was the reason for the Nazi victory. Masses of people voted for Hitler, believed in Goebbels’ propaganda, went with the flow and built Nazi Germany.

Despite the dominance of economic power in our times too, I don’t think that democracy is in danger, in spite of the strengthening of the right in many countries. At the same time I want to mention Montesquieu, who insisted that a the abuse of power by the rulers could only be checked by an opposing power. In our day there is no ‘opposing power,’ everyone purchases weapons from the same manufacturers.