Just in time for Pride Month comes this “private and gem-like book, and reading it is unmediated access to a maelstrom.” –Full Stop 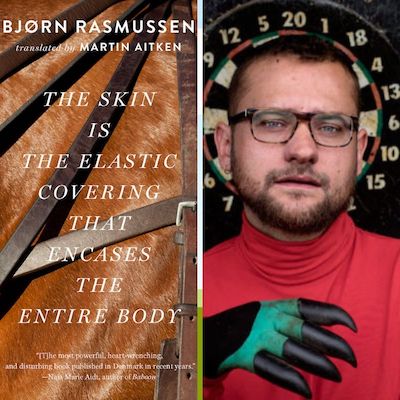 A feverish combination of stream of conscious, autobiography, collage, and narrative, The Skin Is the Elastic Covering that Encases the Entire Body–translated by Martin Aitken–marks the arrival of a truly original literary voice.

A fitting Pride Month read and reminiscent of Maggie Nelson’s The Argonauts, it is as omnivorous as the bodies within it, as unrestrained as the appetites, terrors, and trysts that celebrated author Bjørn Rasmussen evokes in poetic detail.

It follows a teenage boy named Bjørn who cuts into his flesh to find relief from his depressed mother and the sexual desires that frighten him. Bjørn begins a sadomasochistic affair with an older man that promises healing, but instead it only harms him further.

Unlike any book that Two Lines Press has published to date, The Skin Is the Elastic Covering that Encases the Entire Body has earned enthusiastic praise from noteworthy authors and booksellers.

Naja Marie Aidt, who you may remember as the author of Baboon (which we published in 2014), calls it “The most powerful, heart-wrenching, and disturbing, book published in Denmark in recent years.”

From our friend and bookseller extraordinaire Sarah Balabanlirar at Houston’s Brazos Bookstore: “Deeply, deeply in love with Bjørn Rasmussen’s The Skin is the Elastic Covering that Encases the Entire Body. It’s all mess and taboo and excretion tied up in a little tiny beautiful package.”

Spine magazine included the book on its Can’t Wait to Read! list for June.

Full Stop magazine says, “Rasmussen has managed to stretch the soul in the way a butcher might stretch flesh, asking us to consider the roots of our desires and the depths of our longings.”