“Every city is Puerto Rican” 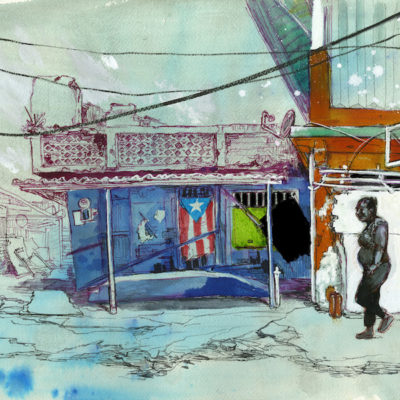 In fall 2018, poets and friends, Raquel Salas Rivera and Carina del Valle Schorske struck up an epistolary conversation in which the two grapple with what it means to be Puerto Rican poets and translators after the devastation of Hurricane Maria. In their co-authored introduction, they write:

Drinking on the old, mossy fortress in Viejo San Juan, talking about bitcoins, exes, and the eyebrows of María Félix, it’s hard to imagine we were ever not friends.

Neither of us expected the devastation brought on by Hurricane María. We formed a nuclear group with poets and translators Ricardo Maldonado and Erica Mena, and the four of us compiled work by poets on the island and in diaspora, printing a series of handmade bilingual broadsides called Puerto Rico en mi corazón after the slogan used by the Young Lords. These poems helped us raise over $3,000 for the grassroots organization Taller Salud, which supports public health and gender justice on the island. But our group was more than editorial: We formed a family, far-flung and necessary, a net where we could catch each other while the grief flowed through us.

We’ve both been on the road with our writing, our relationship to Puerto Rico on the page both shored up and devastated by the disaster capitalism that comes for the culture industry as much as any other sector of the economy. Our correspondence has been a way to tether ourselves to the real work of tending to each other. We’re often each other’s first readers, with the translator’s infinite patience for a single turn of phrase. We both know that a politics of care is fundamental to translation: Just one word can tear down a kingdom or cradle una flor de marta. These are letters from fall 2018, sent en route from city to city. From our point of view, in this exchange, every city is Puerto Rican.

Read the rest of their correspondence at The New Inquiry.

And hear Raquel and Carina continue their conversation in person Wednesday, November 20 at Alley Cat Books & Gallery. Click here for more details and to RSVP. See you there!