An inside-look at how friendship has inspired several of literature’s groundbreaking translations. 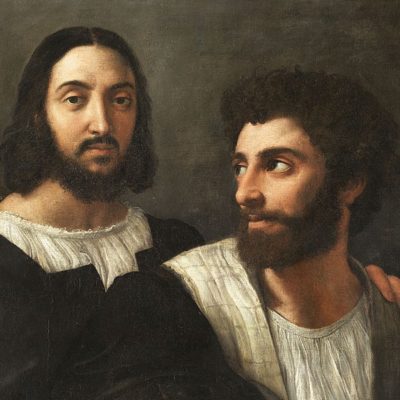 This past semester, I took a class on translation theory and practice. As is the case with most classes, I’ve absorbed much of what I learned either imperceptibly into the framework of my thinking or as knowledge tucked away for future reference. But nearly two months after the class has ended, I’m still thinking about friendship (of all things!) in relation to translation, and I keep finding myself recalling a particular comment my professor made in response to my end-of-semester reflections on translation:

…I disagree with you only about one thing—that the pleasure you took in hearing the work done by other members of the class doesn’t necessarily have anything to do with reflections on translation. Like friendship in the Earl of Roscommon’s poem, or with Edward FitzGerald’s composition/translation of the Rubaiyat, involvement with peers sometimes has a great deal to do with translation and a profound affect on one’s work, or, at any rate, a critical if subtle influence…

To provide some context, I was beginning to run out of passably smart things to say, so I proceeded to express how much I enjoyed seeing and hearing the work of my peers—a remark I’d considered a bit too frivolous to qualify as a reflection. My professor evidently disagreed, and needless to say, I ended up changing my mind.

Friendship can have a lot to do with translation—in many different ways and at any stage of the process, from coming upon a work through a friend’s recommendation to consulting a friend about a final editorial choice. So, in the name of recognizing translation as more than a solitary endeavor, here are five important translations that have friendship to thank in part for their success.

1. William Tyndale’s translation of the Bible, 1530

On the translation: Tyndale is the most influential figure in the history of English Bible translation and was the first to work directly from Hebrew and Greek into English. Upholding the ideals of the Reformation, Tyndale sought to render the Bible accessible to the common people by translating it into the vernacular. Subsequent English translations—most notably the King James version—pulled heavily from Tyndale’s prose, and he enriched the English language by minting Hebrew-English words like “scapegoat,” “passover,” and “atonement.”

On friendship: By undertaking the project of translating the Bible, Tyndale put himself at great risk—at the time, it was illegal to translate the Bible into the vernacular in England. Thanks in part to the help of Martin Luther, however, he was able to find a safer working environment in Germany and left England in 1524 to continue his translation of the New Testament. While it might be a bit of a stretch to label them friends, Tyndale and Luther were no doubt contemporaries in solidarity with each other given their mutual loyalties to the Reformation. Moreover, Tyndale used Luther’s Bible as a reference for both his translation and commentary.

On the translation: Among the myriad English translations of Homer, Pope’s version rises above them all as a masterpiece in its own right. Aiming to capture the spirit and energy of Homer, Pope rendered the Iliad and the Odyssey in vigorous heroic couplets—his preferred form of which he had previously shown mastery in his mock heroic epic The Rape of the Lock, first published in 1712. Pope’s Homer achieved unrivalled commercial and critical success, and the money he earned from his translation alone was enough to sustain him a comfortable lifestyle.

On friendship: Pope’s friend, fellow satirist and co-founder of the Scriblerus Club, Jonathan Swift enthusiastically encouraged Pope to take on the project of translating the Iliad. Swift—who regarded Pope as the finest English poet of the day and declared that Homer “had more genius than all the world put together”—foresaw the potential genius of Pope’s Homer and showed considerable dedication in promoting advanced subscriptions. Thanks to Swift’s efforts, Pope was able to produce translations of both the Iliad and the Odyssey, each divided in six volumes published under the same subscription model.

3. Edward FitzGerald’s translation of the Rubaiyat of Omar Khayyam, 1859–1889

On the translation: Edward FitzGerald’s translation of the Rubaiyat has had an unrivaled influence in terms of its enduring literary significance and continued widespread readership. In his translation, FitzGerald remarkably maintains the original’s form of quatrains. Aside from that, he took considerable liberties, condensing and distributing content as he saw fit and taking it upon himself to organize the scattered stanzas of the original. First published in 1859 but revised four more times over a span of thirty years, the Rubaiyat was initially thought to be an original composition and was met with unanimous praise from the likes of Tennyson, Swinburne, Rossetti, Carlyle, Thackeray, and Ruskin. Even today, FitzGerald’s Rubaiyat has yet to be surpassed as the foremost translation of Omar Khayyam’s masterpiece.

On friendship: It wouldn’t be a stretch to say that FitzGerald couldn’t have translated the Rubaiyat without his dear friend and possible lover Edward Byles Cowell. A mentor to FitzGerald, Cowell not only encouraged him to translate but even taught him Persian (and Spanish). Moreover, Cowell presented FitzGerald with his own transcript of Sir William Ouseley’s manuscript of the Rubaiyat—at the time, only recently discovered in the Bodleian Library—and later gave him a copy of the manuscript itself. Their relationship was by no means one-way—FitzGerald undertook the project in part to thank Cowell for helping him with his earlier trials in Persian and Spanish translation. FitzGerald’s Rubaiyat lies at the heart of this list and goes to show how deep friendship can sometimes produce literary masterpieces.

On the translation: A collection of fourteen translations of classical Chinese poetry along with “The Seafarer” from Old English, Cathay represents a landmark text in modern translation. As much as Pound was accused of not actually knowing Chinese, his translations demonstrated the potential merit of vers libre in conveying the spirit of the original. Cathay also pushed the boundaries of what English poetry could do and was the text that introduced the English reading public to Chinese poetry.

On friendship: Since Pound knew almost no Chinese, he heavily relied on the extensive notes of Ernest Fenollosa, an American orientalist and specialist in Japanese art. Pound wouldn’t have come across Fenollosa’s notes if he hadn’t met Fenollosa’s widow Mary McNeil Fenollosa in 1913. The meeting was serendipitous for both—McNeil sought a poet who could interpret and breathe life into her late husband’s notes on Chinese poetry, while Pound was dissatisfied with the translations he’d read before and expressed interest in Fenollosa’s scholarship. After their first meeting, Pound began corresponding with McNeil, and they met in person three more times before agreeing that he would use Fenollosa’s notes to edit a book on Japanese Noh drama and an anthology of Chinese poets.

On the translation: It is a truth (almost) universally acknowledged that Richard Pevear and Larissa Volokhonsky are the authoritative translators of classic Russian literature. Their translations have been lauded for restoring the distinct voices and styles of their chosen authors. Whereas previous translators—most notably Constance Garnett—smoothed out the rough or clumsy language of the original, Pevear and Volokhonsky prefer to err on the side of too literal or unidiomatic. They have won numerous prizes for their work, including the PEN Translation Prize in 1991 and 2002 for Dostoyevsky’s The Brothers Karamazov and Tolstoy’s Anna Karenina, respectively.

On friendship: Pevear and Volokhonsky also happen to be married. Although they’d both individually had experience in translation before, they didn’t start collaborating until a chance happening. Sometime in the mid-1980s, Pevear began reading David Magarshak’s translation of The Brothers Karamazov, and one day, Volokhonsky took a look at it—what she found was hardly the Dostoyevsky she’d read and knew in the original Russian. The couple then decided to try out their own translation of Dostoyevsky’s masterpiece with Volokhonsky completing a hyper-literal version before handing it off to Pevear to edit the English. After a few bumps in the road, their translation was met with massive success upon its publication in 1990. Ever since, they’ve been working their way through the Russian œuvre.