From the Classroom: The Seldom Heard Voices of English Learners 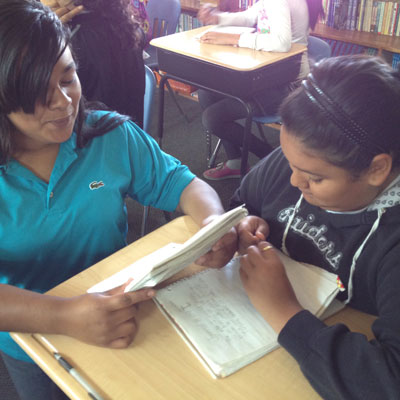 In the last few years we’ve seen Poetry Inside Out spark particular interest among teachers of English language learners. While it’s designed to be taught in any classroom, it seems to fit well with the needs of ELL students and engage them. A multi-year partnership with schools in Worcester, MA has given us the chance to observe how students in the program are learning and building skills.

Two years ago, two teachers from a local Worcester school attended a Poetry Inside Out workshop that prepared them to teach the curriculum to their students. Their classrooms doubled as research sites as they worked with Clark University professors and several Clark students to look at the effects of Poetry Inside Out on student learning.

These teachers’ classrooms were perfect microcosms of diversity. In their school of 400+ students, 71% did not speak English as their first language and 40% were officially designated as “English learners.” Both teachers began translating poetry with their students, recording class discussions and closely observing the students and how they changed over the year.

Lori was struggling with her eleventh grade class. She described them as “disengaged” and unwilling to listen to one another. She introduced the process of translation with a haiku by Japanese poet Mizuta Masahide and for the next lesson chose a poem by the exiled Chinese poet Huang Xiang. This poem sparked a class discussion about communism and exile, unfamiliar to some students but first-hand experience for others. Lori explains:

“In discussing the meaning of exile and the consequences of defying one’s government, students drew on current and past events, such as the case of Edward Snowden and Cuban immigrants. They also shared their home countries’ stance toward free speech. In the 20 minutes it took to discuss a four-sentence-long biography, students gained greater understanding of exile, democracy, treason, and communism. They also pushed each other to restate, clarify, and elaborate.”

Over in Jesse’s classroom, things weren’t going as smoothly. His class was made up exclusively of Spanish speakers, mostly newcomers with very limited English, and was consistently shifting as new students enrolled throughout the year. He wondered whether or not his expectations had been fair, reflecting that “…for the newcomers there was little conversation and they mostly substituted English words for the poet’s words. I was expecting them to translate from one foreign language to another language still foreign to them.”

He tried making adjustments. Since all of his students spoke Spanish, he tried selecting only poems in Spanish for them to translate. The results still weren’t what he had hoped. “I wondered whether my newcomers possessed the requisite capacities and knowledge to engage with Poetry Inside Out. I also wondered how the changing dynamics of my classroom–with students joining and leaving throughout the year–was working against a culture where students could take risks with English, and with each other.”

His experience highlights a common and persistent struggle for ESL teachers: students with virtually no English and classrooms that are constantly in flux. Still, Jesse was determined to keep pushing his students to take on this challenging curriculum. In their last translation of the year, he decided to try having his students translate into Spanish and recorded their discussion so that he could have it transcribed and translated. When he read through the transcript of the discussion, he was impressed:

“From the translated transcript, I was able to hear what these kids sounded like when they spoke fluently. They argued with not only reason but also humor and grace. They played with word meaning and used their expertise in their respective countries as evidence for why they chose to translate the way they did… one of my newest students who also had a learning disability stood her ground against two girls. The poem and Poetry Inside Out had created the space for these students to work together in a group and begin to wrestle with the language. They were working collaboratively and creating meaning together.”

Perhaps the most important element of this curriculum is the way in which English learners are encouraged to speak, listen, debate, and grapple with complex ideas in their own voices. Both teachers agreed, “In both classrooms, we also noted how ‘silent’ English learners, leaning on the voices of master poets, began to trust in and use their own voices.”