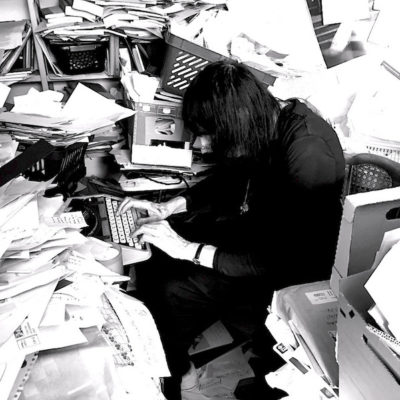 Friederike Mayröcker, an avant-garde Austrian writer of the Wiener Gruppe and Vienna’s Art-Club, makes a practice blurring boundaries of language, form, and media. To her, writing is a process of transforming images into speech that does not form a narrative as much as a landscape. In her own words: “I live in pictures. I see everything in pictures, my complete past, memories are pictures. I transform pictures into language by climbing into the picture. I walk into it until it becomes language.”

Writing is a physical journey, carrying the body down roads both known and unknown. Down these paths, we are over-stimulated by a mixture of moments and memories; in Poetry Ireland Review, Peter Sirr called this over-stimulation “a kind of continuous torrent of freely associative, passionate language in the service of private obsessions.”

Jonathan Larson’s translations in Two Lines 27 exemplify Mayröcker’s style and the intimate nature of her practice. These four poems from Mayröcker’s Scardanelli channel the German Romantic writer Friedrich Hölderlin, who sometimes wrote under the pen-name Scardanelli. Mayröcker, speaking through and as Hölderlin/Scardanelli, fuses intensely visual memory-images with stand-alone interruptions and fragments of her post-surreal syntax.

This comes rather immediately. We are introduced to her illusory landscape of memory in the first two lines of the first poem featured: “I open the door crying and it falls at my feet : it comes to / me THE HUMILITY and at the threshold the naked waters.” In this poem there are distinct places, emotions, and hauntings; there is a fog that is both present and aged, and a feeling of revelation both mystical and earthly. Like in a dream, or deep in subconscious thought, one phrase triggers another. We cross specific places: a house in Vienna, a few cafés; most of these are distinctly natural: we are in the mountains or the woods, on a meadow or a hill. We are unsure whether it is we who move or merely language.

An untranslated German word, one that seems both a surname (and certainly part of Scardanelli’s own name) and an utterance of amen, haunts our reading of each poem save the last: “Höld.” Stylistically, this resembles Hölderlin’s fragmented poetics, which has been problematically attributed to schizophrenia. Mayröcker, a post-surrealist and a visual mapper of language, reads quite at home in Scardanelli’s skin, where her pictures and her past (as well as Hölderlin’s) commingle to produce a truly spectacular landscape of living and breathing experiences that come to life as quickly as they fade.

Meandering through spaces distinct yet ambiguous, we are voyeurs of apocalyptic destruction everywhere. At the end of each poem we watch our world crumble. Words catch fire: “The enflamed breast of the verses leaned / against the hills while green living ivy”; and the entire landscape is on the brink of collapse: “we walked and wended / stood still, looking at the white horizon that had / enflamed itself in white glow (gleams and shimmers and skull- / free) namely liverwort WILD at the woods’ edge, and how the ground / turned itself blue.”

There’s an emphasis on movement, on walking through spaces, and on rendering these spaces into language by infusing landscapes with memory and subjectivity. In this sense, Mayröcker’s landscapes have something almost New Narrative about them. New Narrative, the experimental writing movement that infuses poetry with (historically, queer) subjectivities, is known to lay bare whole souls; New Narrative is all about expressing private obsessions, vulnerable moments, and many sexual encounters.

There’s an early poem in Eileen Myles’ Snowflake / different streets (Wave Books, 2012) that reads like a bridge between U.S.-based New Narrative and this poet of the Wiener Gruppe. In “#1 (With Music),” Myles writes of an “emerging / possibility of writing” that could pass for a Mayröcker blueprint replete with spaces that blur the line between the natural and the manmade, personal attachments that veer cryptic, and a focus on the senses, on experience, save for some elements of (post-)surrealism:

Myles is guided by personal connection, animated by physical movement; the piece stacks visual vignettes—minuscule in both description and size—on top of one another, juxtapositions that create new side streets or alleyways. Myles walks and writes, and their path invites association with intimacies and memories; on a walk, we’re given a view into a personal voice, a personal landscape that is, itself, a possibility of writing.

And across these two poems, a kind of history forms: one of womyn disrupting language to refashion it in novel forms. We can call it “post-surreal” and “new” forms of “narrative” or we can think about how poets have stretched language, and continue to do so, to include bodies and experiences that do not rest neatly within the historical confines of a traditionally-masculine culture of writing.

You can read Jonathan Larson’s translations of Friederike Mayröcker’s poems in the latest issue of Two Lines.