Because of her accessibility and profound immediacy, Ginzburg is an author that many new Italian speakers find. 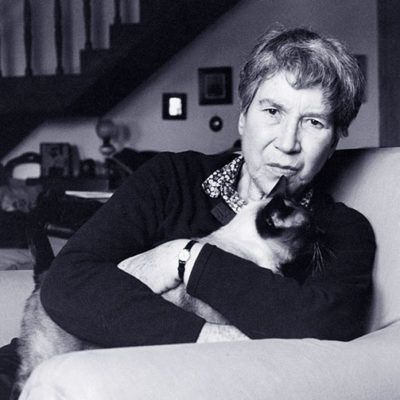 In college, I took a class called Italian Women Writers. It was a survey course comprising such a rarified group that we covered a huge amount of the entire territory in one semester. Two writers in particular stood out for me in the course. The first was the contemporary Florentine writer Monica Sarsini, who I’d actually met, because she was my boyfriend’s mother’s best friend. I was very impressed with her for being so famous (and me for knowing her). The second was Natalia Ginzburg, whose work I could read. Read, even with my student Italian, with the same ease and pleasure I would have read a novel in English. Her sentences were so direct, her language unfancy; her writing moved off the page, organically, like wind off the ocean. Salty, pure, harsh, primordial.

Both writers were vital to my formation as a translator: the very first thing that I ever tried to translate was an intricate prose poem by Monica Sarsini. I translated it because I couldn’t understand it in Italian and was trying to find a way to read it. It wasn’t an assignment, it was a kind of game that I undertook one weekend, the way someone might try to learn to knit, or replace the dented fender on a ’73 Buick from parts—to see if it was possible and to see what it yields. Sarsini’s poem had invented words about an invented animal whose pronoun shifted in continuation, which meant that my English version seemed riddled with mistakes. I couldn’t have chosen a more difficult first translation.

The second thing I ever tried to translate, my senior year in college, was Natalia Ginzburg’s “Winter in the Abruzzi.” I was in the midst of of a year-long thesis project on literary translation, and, as an exercise, retranslated it and wrote commentary—comparing my translation choices to the existing 1985 translation by Dick Davies[1]. Fueled by youthful arrogance (and modeling myself on my professor who had taught me Walter Benjamin’s “The Task of the Translator” against the original German because Harry Zohn’s translation was “problematic,”) I tore into Davies’ work. I especially took issue with his translation of the little song:

Mummy with an angry frown

Popped me in the cooking pot,

When I was done and piping hot

Greedy daddy gulped me down.

Those were analog years and I have long lost that paper and thus have no record of what I proposed to be a better solution or what I found to be particularly offensive. I have subsequently decided that it is a perfectly robust translation. That essay is beautiful (and structurally, a triumph of short form memoir) and I regularly teach it, with Davies’ translation, to my writing students.

Because of her accessibility and profound immediacy, Ginzburg is an author that many new Italian speakers find. Especially, I think, The Dry Heart[2] with its gripping saucy opening: “I shot him between the eyes.” I remember the feeling of supreme grief, even as a very young translator, realizing that everything of hers had already been translated, everything had been discovered, there were too many fans, and there was no way, none whatsoever, that I would ever get a chance to actually translate Natalia Ginzburg. I’d have to satisfy myself with reading her, learning from her as a writer, and teaching her. All of which I’ve done in the twenty-five years since I first confronted that essay.

It turns out that “never” is one of those words with multiple interpretations. Because this past year, by some miracle, I was given the opportunity to translate Ginzburg. An experience that has only deepened my admiration. When I think about, or discuss, Happiness As Such,[3] I am ever more impressed by how complicated, touching, funny, wise, and unique this novel is… a novel that Ginzburg wrote in two months in the fall of 1972. Realistically, she wrote it faster than I translated it.

There’s a chapter in Sandra Petrignani’s comprehensive new biography[4] of Natalia Ginzburg, set in 1948. Ginzburg was an editor at Einaudi, publishing Elsa Morante’s debut novel.[5] She loved the novel and advocated strongly for it to win the prestigious Premio Viareggio. “My friendship with Sibilla is definitively over”[6] she writes to Morante from a conference. “She’s been shooting darts at me all week,” she continues—presumably because Morante would be stealing Aleramo’s thunder at the ceremony.[7] Up to that point, only one woman had won the prize; that year Morante won for fiction and Aleramo for poetry.  There’s something so giddy captured in that historical moment. Three great women writers in a pitched battle: Natalia, Elsa, Sibilla. As if—and were that it were true—it was perfectly normal for three brilliant women to be fiercely dominating the Italian postwar literary scene. It’s a guilty pleasure to beam forward from that moment, through the years of Moravia, Pavese, Calvino, Pasolini, Levi, Eco—unarguably great Italian writers —to this moment: Elena Ferrante is easily the most famous Italian writer in the world, and Natalia Ginzburg is known, beloved, translated and retranslated. Hardly footnotes of history, as they might have once been considered, and no longer classified according to the diminutive terminology “women writers,” a classification that Ginzburg rejected ardently throughout her career, they are all the glorious pillars.

Minna will join Ismail Muhammad this THURSDAY at The Laundry SF to discuss her translation of Natalia Ginzburg’s Happiness, as Such. Hope to see you there!

[1] Lynne Sharon Schwartz also retranslated that essay in her 2002 collection A Place to Live. Her version goes:

My stepmother mean and cruel

Cooked me into a gruel

And my greedy father ate

Every bite upon his plate.

[2] Frances Frenaye’s translation of È stato cosí (literally, “this is how it was”)

[4] Petrigniani’s 2018 biography is entitled La Corsara: Ritratto di Natalia Ginzburg, which I have given the working title of The Renegade: Natalia Ginzburg’s Life and Writing

[7] It should be noted that Petrignani alludes to a possible romantic quagmire that might have also inspired Aleramo’s rage.