We will be publishing a novel by the award-winning Swedish author later this year. In the meantime, read his essay on his Muslim identity over at Words Without Borders. 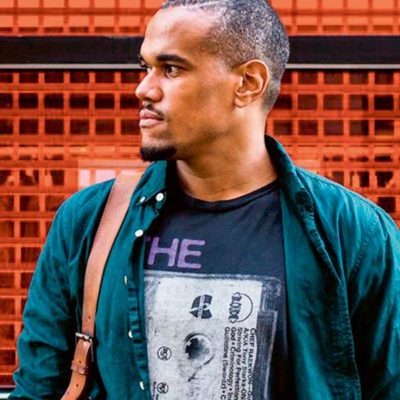 Have you seen the latest issue of Words Without Borders? Edited by Saskia Vogel, it features a beautiful selection of contemporary Swedish literature.

In her introduction to the issue, Vogel explains how recent events—including a controversy over allowing a right-wing extremist publication to exhibit at the 2017 Göteborg Book Fair—propelled her to rethink her own role as a translator of Swedish literature:

One piece from this issue that speaks particularly well to this idea of “belonging” is “Alhambra,” a lyrical essay by Johannes Anyuru and translated by Kira Josefsson.

We’ll be publishing Anyuru’s August Prize-winning novel They Will Drown in Their Mothers’ Tears later this year in Saskia Vogel’s translation. The novel focuses on the run up and aftermath of a terrorist attack in Göteborg, blending elements of science fiction with an otherwise realistic story of religious and political extremism, fractured identity, and Islamophobia.

“Alhambra” is as good an introduction as any to Anyuru’s unique and powerful writing style, and as Vogel says, this essay ought to be “essential reading for our time.” Focusing on issues of Muslim identity in modern day Europe, the essay is a powerful testament to the need to expand our scope of what it means to belong to a single nationality, as well as what it means to be a Muslim in today’s political climate:

As I walk under Alhambra’s white arches, so like a long letter, I think of Miles Davis. He is said to have handed out the score to a new piece of music while instructing his confused fellow musicians to play what was not on the page. Some of his greatness, of course, lay in how he moved inside the zone where silence turns to sound in particular ways. The whining, gloomy cries of his trumpet existed not just at the edge of the music, but, also at the edge of the sound itself. Religion can be said to be about “playing what isn’t there,” though in relation to the body: being a Muslim is a specific way of not being this hair, not being these nails, these teeth, this brain—a way of not being all this which is going to be sucked down the wells of oblivion.

Read more over at Words Without Borders.