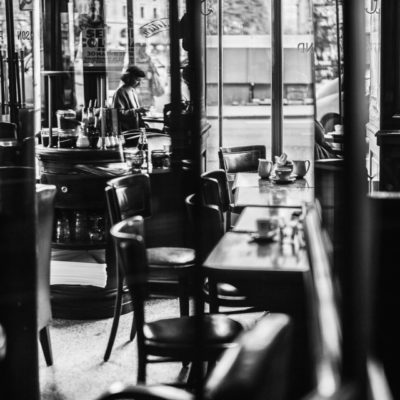 Before winning the Nobel Prize in Literature in 2014, Patrick Modiano was a nobody in the English-speaking world. We’ve since seen the urgent attempt at playing catch-up. Translations of his works have been released, re-released, and consumed by readers hungry to know who this Modiano character is and why they had never heard of him before.

A few weeks ago, I decided to give Patrick Modiano a try in preparation for this week’s Salon with Modiano translator Chris Clarke. And so I read Young Once (tr. Damion Searls) and In the Café of Lost Youth. The truth is I devoured them; I read each novel in a single day, becoming one of those zombies who tries to read while walking, in the car before driving, in the car after driving, at the dinner table, etc. They are slim, easy reads, and yet brevity does not always guarantee binge-like consumption. I’ll readily admit that I’ve struggled to get through 70-page novels merely because I feel distractible, uninvested, my eyes on the page, my attention elsewhere.

But Modiano’s prose rises up like a city around you. Though I’ve never been to Paris, I found myself inundated by its unremarkable landmarks–garages, benches, innumerable arrondissements, and dingy, hole-in-the-wall cafés. Because in these novels geography exists, first and foremost, as a series of monuments to the past. Characters avoid streets, even entire neighborhoods, in an effort to skirt the painful memories from their childhoods. Others return compulsively to their old neighborhoods, drawn there unconsciously, as if the city itself were guiding them. In this way Paris becomes a graveyard of moments lost to time, and Modiano treats them with their due precision and reverence.

It’s clear from the titles that Modiano wrote with a predilection for looking back at young adulthood. The main characters in these novels are in their early twenties, living in Paris, and, in one way or another, directionless. It would be wrong to call Modiano nostalgic, however. Instead, his “lost youth” are neither pure nor idealistic. They’re unproductive. They cavort with questionable, at times pathetic, characters. Though they discuss books and ideas among the smoke clouds of dingy Parisian cafés, Modiano manages to subtly bypass those easy clichés. None of the characters embody the self-aware, self-pitying Hamlet type you might expect. Rather, they carry the burdens of their upbringings—poverty, hunger, absent parents, crime—in a city that seems designed to mass-produce directionless youth. In this self-contained world, what else is there to do but wander the arrondissements and stay up drinking in all-night cafés?