Just in time for summer, we scoured the archives to find author and translator interviews and book writeups you might have missed. 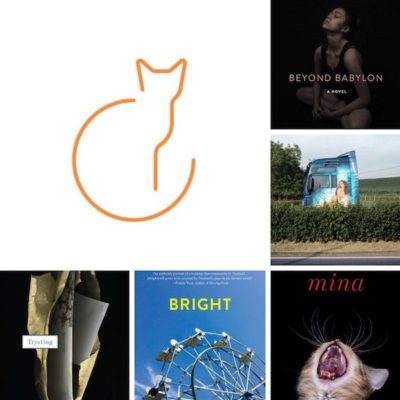 We just released Igiaba Scego’s Beyond Babylon in May, translated by Aaron Robertson. The book features an introduction by author and translator Jhumpa Lahiri, who is celebrated in English and has become known in recent years for her switch to writing in Italian. She was interviewed about the book on the New York Review of Books blog.

In April we released the first novel by a Thai woman ever to be published in the U.S. Duanwad Pimwana’s Bright, translated by Mui Poopoksakul, is a touching portrait of a young boy growing up in working class Thailand. Pimwana won the S.E.A. Write Award for the book, the first woman to do so. In an interview on the Books & Bao blog, translator Poopoksakul talks about her career switch from law to translation, the challenge of “representing” Thai literature, and her current projects. She also wrestles with the question of “What Does It Mean to Be a Thai Feminist?” in her essay in Electric Literature.

Lion Cross Point was our first translation from Japanese, released in April 2018 and translated by Angus Turvill. Author Masatsugu Ono won the prestigious Akutagawa Prize for an earlier book and was featured on Dallas-based Interabang Books podcast talking about childhood, trauma, and translation. Ono was also interviewed by World Literature Today about being part of the “post-Murakami generation.”

Kim Sagwa‘s Mina–Two Lines Press’s first foray into contemporary Korean lit–is an intense look at teenagers in Seoul and was called “’one of the rawest and most honest depictions of what it’s like to be a teenager’” by Seattle bookseller Caitlin Luce Baker in her conversation with The Seattle Review of Books in September 2018.

On the heels of winning the Helen & Kurt Wolff Translator’s Prize for her translation from German of Wolfgang Hilbig’s Old Rendering Plant–about which the jury said, “Isabel Fargo Cole’s superb translation rises to the myriad challenges with stylistic pyrotechnics: alliterations and assonances, wordplay of all kinds, and inventive phrasings that capture the text’s lyrical and sensual qualities.”

In April 2018, Isabel Fargo Cole was interviewed about Hilbig, her translation process, and her experience as both a writer and translator.

In October 2017 we interviewed Christina MacSweeney about her translation of Elvira Navarro’s A Working Woman. Navarro was named a “Best of Young Spanish-Language Novelists” by Granta magazine, and A Working Woman was awarded “Best Book of the Year” in Spain. MacSweeney has garnered awards and praise for her translations of Valeria Luiselli’s novels, including The Story of My Teeth, for which she won the 2016 Valle Inclán Translation Prize; and recently translated Verónica Gerber Bicecci’s Empty Set.

A Working Woman is an ambitious tale of feminine friendship, madness, a radically changing city, and the vulnerability that makes us divulge our most shameful secrets. In the interview MacSweeney talked about how she handled the novel’s unconventional structure and unreliable narrator, plus details of her translation process. Read the entire conversation.

We’re also delighted to share our interview with A Spare Life translator Christina Kramer once again. The coming of age saga from master poet and storyteller Lidija Dimkovska tells the lives of two astonishing girls caught up in Eastern Europe’s transition from communism to democracy. Publishers Weekly called it “[A] kaleidoscopic, bighearted novel,” and the book was longlisted for the Best Translated Book Award in 2017. Kramer is a professor of Slavic and Balkan languages and linguistics at the University of Toronto. She told the Center’s Sarah Coolidge that she knew Lidija Dimkovska’s poetry but hadn’t known Dimkovska was a novelist until she was offered the chance to translate A Spare Life. “After reading the first fifty pages, I jumped at the opportunity to be the voice of both Lidija and Zlata. Who would turn down the opportunity to work with an author whose language is so vivid and original!” Check out the full interview.

We asked you to #tweetyourtryst to celebrate the release of Emmanuelle Pagano’s Trysting in November 2017, translated by Jennifer Higgins and Sophie Lewis. The book is a collection of 300 “fragments”: mini-tales about relationships. Our friend Mark Haber at Brazos Bookstore in Houston called it “Universal, yet utterly personal.… Beguiling and uncategorizable, it celebrates the joys and heartbreaks of being alive.”

Here’s one of the trysts from the original post, by Baboon author Naja Marie Aidt: When we first met he sat down in a worn out office chair in the farthest end of the room. I didn’t want to get up from my desk. I worried that he wouldn’t adore my pants. I noticed that his nails were very long. I got the impression that he was a classical guitar player. He was not. Four months later he moved in with me and my three kids. I liked the way he slept. I would stay awake all night to watch over him. His dreams seemed so much more dramatic and interesting than mine. The way his hair got all sweaty aroused me. Read more trysts, or #tweetyourtryst!

If you haven’t had a chance to read the two Two Lines Press books by Brazil’s João Gilberto Noll, read our interview between Quiet Creature on the Corner translator Adam Morris and Katrina Dodson first! Dodson is a fellow Portuguese translator whose rendering of Clarice Lispector’s The Complete Stories in English was a New York Times Editors’ Choice for 2015. Noll’s was one of Brazil’s most esteemed contemporary authors (he died in March 2017), but unknown in English until the release of Quiet Creature. Their wide-ranging conversation touched on understanding the more inflammatory scenes of sex and violence in Quiet Creature, and what Noll’s work means for the present cultural and political moment in Brazil and beyond.

To wrap it all up, what better way to kick off your summer reading than a chronicle of the U.S. travels of The Boys author Toni Sala during his 2015 book tour?