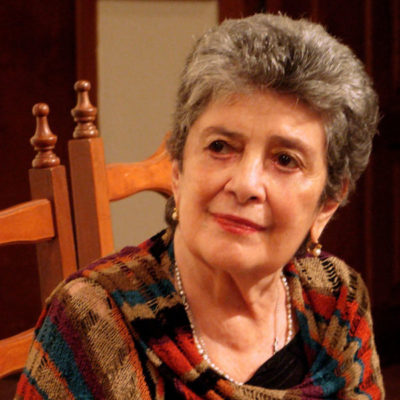 Author, Spanish
Clara Isabel Alegría Vides (born in 1924) was born to Nicaraguan and Salvadoran parents in Estelí, Nicaragua, and spent her childhood in exile in El Salvador. A poet, essayist, novelist, and journalist, she became a major voice in the literature of contemporary Central America, writing under the pseudonym Claribel Alegría. A graduate of George Washington University, she lived in the United States, Mexico, Chile, and Uruguay, and on the island of Majorca, Spain, before returning to Nicaragua in 1979 after the Sandinista National Liberation Front took control of the government. She published numerous books of poetry, including Casting Off (Curbstone Press, 2003) and Sorrow (1999), which focuses on the death of her companion and translator, Darwin Flakoll. She won the Cuban-sponsored Casa de las Américas prize in 1978 for Sobrevivo (I Survive) and, in 2006, she was awarded the Neustadt International Prize for Literature. (Photo credit: photo courtesy of El Autor y su Obra)
Print Journals