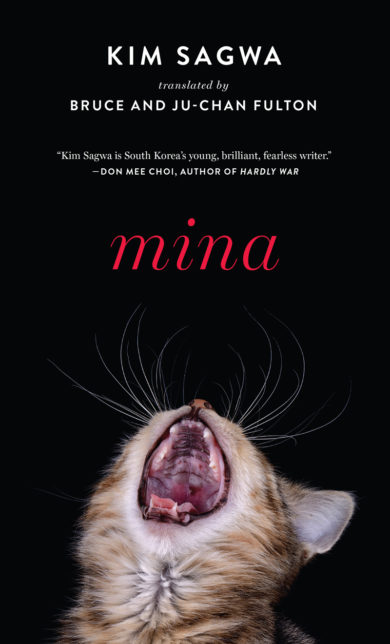 by Kim Sagwa
Translated from Korean by
Bruce and Ju-Chan Fulton
$14.95
Add to Cart

“Shocking and powerful…Sagwa captures all that’s complicated about adolescence in Mina but goes further, portraying a disaffected generation cracking under the pressures of perfection and the drive for success in a time that could only be our own.” —Book Riot

“Kim Sagwa is South Korea’s young, brilliant, fearless writer. In Mina, Kim has created a frenzied language of three teenagers—Mina, Minho, and Crystal—living in ‘P City,’ which in Korean sounds the same as ‘Blood City.’ Beneath the immaculately manicured middle-class affluence, chandelier glitter, free-market economy, and Western cultural hegemony runs the blood of Korea’s dictatorial conformity and historical fratricide. The trio are hollow teenagers in the age of globalization—they mirror one another, reflecting, deflecting, and signaling their helplessness and hatred for the world that has created them. Mina is a story of ‘abjection,’ to borrow Kristeva’s term—a state in which ‘meaning collapses.’ Mina leads us to a place where mirrors of the self and world fold, collapse, shatter, and bleed to death. Mina is one of Bruce and Ju-Chan Fulton’s finest translations.” —Don Mee Choi, author of Hardly War

“She doesn’t know what to do, and that amounts to a state of torture.”

Crystal toils day and night to earn top grades at her cram school. She’s also endlessly texting, shopping, drinking, vexing her boyfriends, cranking up her mp3s, and fantasizing about her next slice of cheesecake. Her non-stop frenzy never quite manages the one thing that might calm her down: opening up about the pressures that are driving her to the edge. She certainly hasn’t talked with her best friend, Mina, nor Mina’s brother, whom she’s developing a serious crush on. And Crystal’s starting to lose her grip.

In this shocking English debut, award-winning Korean author Kim Sagwa delivers an astonishingly complex portrait of modern-day adolescence. With pitch-perfect dialogue and a precise eye for detail, Kim creates a piercingly real teen protagonist–at once powerful, vulnerable, and utterly confused. As one bad decision leads to another, this promising life spirals to a devastating climax.

“Shocking and powerful…Kim captures all that’s complicated about adolescence in Mina but goes further, portraying a disaffected generation cracking under the pressures of perfection and the drive for success in a time that could only be our own.” —Book Riot, “The Best Korean Fiction in Translation”

“Award-winning Korean author Kim’s first novel to be translated into English is a powerful portrayal of teenage angst. . . . [It] will keep readers rapt until the end.” ―Booklist (starred review)

“[Kim] is an expert, crafting an unsettling, deeply felt, and ultimately devastating depiction of the turmoil of youth.” ―Publishers Weekly

“The novel is full of such vivid details, difficult to read and more difficult to forget. . . . A startling, disturbing portrait of teenage friendship.” ―Kirkus

“Mina gets to the core of Korean teenagers. Kim Sagwa’s fragmented rhetoric stands for a generation that has no choice but to set imitation as its standard. The novel, which points out a universal desire for unattainable genuineness, focuses on teenagers while at the same time shining light on Korean society at large. Readers open their eyes wide to the agonizing violence of a character torn up by the inability to bear self-deception.” —Han Yujoo, author of The Impossible Fairy Tale

“For Mina, Minho, and Crystal, three Korean teens, the methodical quality of everyday life quickly fractures into myriad jagged directions. Sagwa writes with subtlety not just about the cram school experience, but about the thin line between apathy and violence. Rarely do I read a book so expertly suffused with the angst, anger, and instability of adolescence.” —Sara Balabanlilar, Brazos Bookstore

“I highly recommend Kim Sagwa’s explosive and powerful debut novel Mina, translated from the Korean by Bruce and Ju-Chan Fulton. In Mina, Sagwa perfectly captures the pressures faced by Korean teens Mina, her brother Minho, and best friend Crystal. This is an unforgettable book and I look forward to reading more of Sagwa’s writing in the future.” —Caitlin L. Baker, Island Books (Mercer Island, OR) 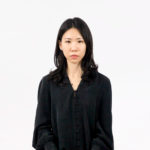 Author
Kim Sagwa
Kim Sagwa is one of South Korea’s most acclaimed emerging writers. She is the author of several novels, story collections, and works of nonfiction, and has been shortlisted for several major South Korean awards, including the Munji Prize and the Young Writers Award. Kim contributes columns to two major Seoul newspapers, and she co-translated John Freeman's book How to Read a Novelist into Korean.
Translator
Bruce and Ju-Chan Fulton
Bruce and Ju-Chan Fulton are the translators of numerous works of modern Korean fiction. Their most recent translations are the graphic novel Moss by Yoon Taeho, The Human Jungle by Cho Chŏngnae, and Sunset: A Ch’ae Manshik Reader, from Columbia University Press.