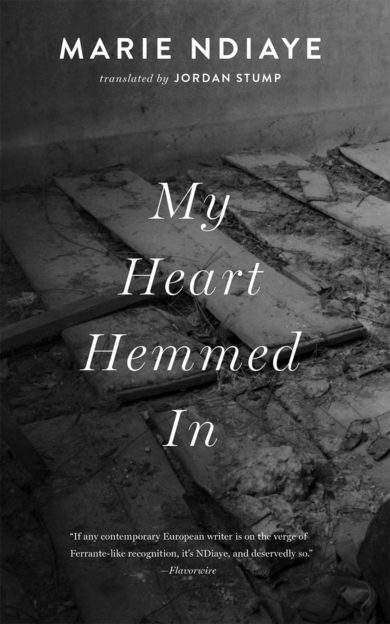 My Heart Hemmed In

by Marie NDiaye
Translated from French by
Jordan Stump
$14.95
Add to Cart

Marie NDiaye has won lavish praise for her unrivaled ability to reveal our innermost lives. My Heart Hemmed In is her grandest statement on the hidden selves we rarely glimpse, but whose presence is always with us.

Something’s very wrong with Nadia and her husband, Ange, middle-aged schoolteachers who slowly realize they’re despised by everyone in their community. One day a savage wound appears in Ange’s stomach—as Nadia fights to save her husband’s life, their hideous neighbor Noget (who everyone insists is a famous author) inexplicably imposes his care on them. While Noget fattens them with ever richer foods, Nadia embarks on a lurid visit to her ex-husband and estranged son—is she abandoning Ange or revisiting old grievances to save him?

Conjuring an atmosphere of paranoia, My Heart Hemmed In creates a nightmarish world where strange coincidences and uncertain relationships are all part of some shadowy truth. Surreal, allegorical, and psychologically acute, My Heart Hemmed In shows a masterful author giving her readers her most complex and compelling world yet.

“If any contemporary European writer is on the verge of Ferrante-like recognition, it’s NDiaye.” — Flavorwire

“My Heart Hemmed In thoroughly consumes the reader with its lovely, spooky language… Like Samanta Schweblin’s Fever Dream, it generates both a sense of mounting unease and a pleasurable desire to learn just what, exactly, has gone so wrong.” — Caite Dolan-Leach, author of Dead Letters

“The latest translation of Marie NDiaye into English is unquestionably one of the great novels of 2017. Eerily prescient in its examination of cruelty, xenophobia, and paranoia, My Heart Hemmed In is both a comfort and a warning in an increasingly destabilized world.” — Patrick Nathan, author of Some Hell

“My Heart Hemmed In is extraordinary: an original and suspenseful novel that exposes all that is monstrous and ugly in the way that we regard those around us—our tendency to harbor suspicions, judgments and prejudices against people we do not want or even try, to understand. NDiaye takes us inside the disturbing mind of Nadia, her unforgettable protagonist, with writing that is arresting; the tension, immediately palpable, builds steadily. The temptation to turn the pages quickly is great but the prose is so fine that you will want to savor it. With its unsettling atmosphere reminiscent of Doris Lessing’s The Fifth Child, NDiaye’s brilliant novel obtains pride of place with the very best literary horror. My Heart Hemmed In is a morality tale for our times.” — Lori Feathers, Interabang Books and the National Book Critics Circle Board Member

“NDiaye is writing a literature both innovative and incredible.” — The New Republic

“[NDiaye’s] inspiration lies not in the real world but in nightmares.” — The New York Times

“NDiaye is a rare novelist.” — NPR

“[NDiaye] is an impressive stylist with a strong voice.” — San Francisco Chronicle

“Marie NDiaye’s Self Portrait in Green is phenomenal.” — Idra Novey, author of Ways of Disappearing

“NDiaye’s storytelling approaches something of the power and simplicity of folklore.” — The Boston Globe

“NDiaye dissects her characters with impressive forensic detail, the subtlest speech inflection or gesture put under the microscope.” — The Independent (UK) 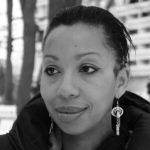 Author
Marie NDiaye
was born in 1976 in Pithiviers, France. She is the author of around twenty novels, plays, collections of stories, and nonfiction books, which have been translated into numerous languages. She’s received the Prix Femina and the Prix Goncourt, France’s highest literary honor, and her plays are in the repertoire of the Comédie-Française.

Translator
Jordan Stump
Jordan Stump is one of the leading translators of innovative French literature. The recipient of numerous honors and prizes, he has translated books by Nobel laureate Claude Simon, Jean-Philippe Toussaint, and Eric Chevillard, as well as Jules Verne’s French-language novel The Mysterious Island. His translation of NDiaye’s All My Friends was shortlisted for the French-American Foundation Translation Prize.
Excerpt

Excerpt from My Heart Hemmed In

I back away into the dark living room, self-conscious, convinced I’m being watched. I tug the curtains closed. I’m sweating. I think I saw the rain coming harder now, pounding the windows—I see it, but I can’t hear it, my mind associates it with a familiar sound but I can’t make out that sound, as if the apartment had suddenly been fitted with some sort of impregnable insulation. And I still don’t dare turn on the lamps or spell out the frightening but indistinct thought floating to the surface of my consciousness, pressing me to concede that I have no idea what would happen, what I would see, if I let light fill the living room, where my furniture, my cherished, handsome, expensive furniture, delighted to be deceiving me, might be hiding worrisome strangers, bloodthirsty guardians. That neighbor, I tell myself, might have been sent solely to distract me from what is in fact being fomented right here in my living room, the last place I’d ever suspect.

I stand frozen in place. My ear vigilant despite my feeling I’ve been swathed in cotton, I think I hear breathing. Mine? No, someone else’s, it’s coming from further away. I firmly cross my arms to keep my hands from clasping my cheeks and heightening my fear. I very slowly back away toward the bedroom. I then distinctly hear Ange’s breathing—was that him I was hearing? Was it both of us together?

Inside the bedroom, I close the door and pull the little latch. Then, beleaguered, I sit down on the bed as gently as I can, taking care not to wake Ange. But shouldn’t he be stirring anyway? Is it normal, is it healthy to sleep so much? Deep down, I realize, I don’t want to wake him just yet, because I’m not sure I’ll recognize him, I’m afraid he might say strange things to me, I don’t want him seeing me in the near terror the ambiguities of my living room have plunged me into. Little by little I get hold of myself, I begin to fight back at my imagination. Stand up, go into the other room, turn on all the lights, I whisper, and see for yourself that nothing has changed.

But I don’t. The heavy darkness surrounds me. Even Ange’s presence seems charged with danger, with unknowable perils. As long as he’s asleep, the menace is quiet. And so, taking pains not to look at him, my own husband, the man I once felt so at one with, I stay perfectly still. I stare at the little latch on the door. I would certainly feel a heartfelt horror if I were to see that little latch move and burst open, succumbing to a mighty force applied from the living room, but I’ve so thoroughly convinced myself it’s going to happen that I’m almost exasperated to see it not happening. At least, I say to myself, at least let me know what or who I’m facing. But even if the door did suddenly burst open, would I know? Would I be capable of understanding what I saw before me? And would I see anything before me at all? Those questions torment me.