Quiet Creature on the Corner

by João Gilberto Noll
Translated from Portuguese by
Adam Morris
$9.95
Add to Cart

Quiet Creature on the Corner marks Noll’s U.S. debut. An unemployed poet finds himself thrown in jail after inexplicably raping his neighbor, but his time in the slammer is mysteriously cut short when he’s abruptly taken to a new home—a countryside manor where his every need is seen to. All that’s required of him is to…write poetry. Just who are his captors, Kurt and Otávio? What of the alluring maid, Amália, and her charge, a woman with cancer named Gerda? And, most alarmingly of all, why does Kurt suddenly appear to be aging so much faster than he should?

Reminiscent of the films of David Lynch, and written in Noll’s distinctive postmodern style—a strange world of surfaces seemingly without rational cause and effect—Quiet Creature on the Corner is a bizarre existential mystery with deep implications. Written during Brazil’s transition from military dictatorship to democracy—and capturing the disjointed feel of that rapidly changing world—Quiet Creature is mysterious and abrupt, pivoting on choices that feel both arbitrary and inevitable. Like Kazuo Ishiguro, Noll takes us deep into the mind of a person who’s always missing a few crucial pieces of information. Is he moving toward an answer, or is he just as lost as ever?

“Meeting the unforgettable narrator of Quiet Creature on the Corner felt like finding that the narrator of Camus’s The Stranger had suddenly learned new and darker lessons in desire. Noll’s is a captivating voice.” — Matt Bell, author of Scrapper

“A wonderfully dislocated read, Quiet Creature on the Corner shimmers through the consciousness of a wounded, and wounding, man who experiences the sharpest impacts of himself with the world and is able to hang on to very little else, including the passage of time. It’s like what might have happened if Werner Herzog had written a hypnotized sequel to Peter Handke’s The Goalie’s Anxiety at the Penalty Kick.” — Brian Evenson, author of Fugue State and A Collapse of Horses

“Noll’s literature doesn’t seek to impart a lesson or demonstrate anything. Above all, it shows the poetry in the fact that no one individual is a permanence but rather many simultaneous things.”      — Sergio Chejfec, author of My Two Worlds

“Noll is a master of prose, one of Brazil’s true literary icons.” — Literary Hub

“Without any plan, motivated only by curiosity and the compulsion to keep writing. This is how…João Gilberto Noll gives life to his books, always curious to find out how a solution might emerge.”      — O Globo

A Literary Hub and Vol. 1 Brooklyn Recommended “Book to Read in May”

“As much as the novel deserves its comparisons with the work of some of the modernist giants, Quiet Creature on the Corner…shows Noll blazing past them into his own territory with a story for a different age.” — Cultured Vultures

“A spare and modestly surreal tale of a young man who surrenders himself to a life that is inexplicably handed to him.… Newly released from Two Lines Press, in a measured, wonderfully restrained translation by Adam Morris, this novel offers an English language audience an absorbing introduction to this esteemed Brazilian author.” — Numéro Cinq

“As urgently relevant as any contemporary novel.… Quiet Creature on the Corner augurs a notable English-language career for João Gilberto Noll.” — Chicago Review of Books

“Readers will be delighted that his 1991 mid-career work has now been translated into English.”            — Publishers Weekly

Author
João Gilberto Noll
João Gilberto Noll (1946–2017) is the author of nearly twenty books. His work appeared in Brazil’s leading periodicals, and he was a guest of the Rockefeller Foundation, King’s College London, and the University of California at Berkeley, as well as a Guggenheim Fellow. A five-time recipient of the Prêmio Jabuti, and the recipient of more than ten awards in all, he died in Porto Alegre, Brazil, at the age of seventy. 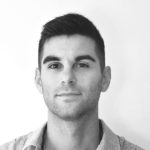 Translator
Adam Morris
Adam Morris has a PhD in Latin American Literature from Stanford University and is the recipient of the 2012 Susan Sontag Foundation Prize in literary translation. He is the translator of João Gilberto Noll’s Atlantic Hotel (Two Lines Press, 2017) and Quiet Creature on the Corner (Two Lines Press, 2016), and Hilda Hilst’s With My Dog-Eyes (Melville House Books, 2014). His writing and translations have been published widely, including in BOMB magazine, the Los Angeles Review of Books, and many others. He lives in San Francisco.
Excerpt

Excerpt from Quiet Creature on the Corner

At breakfast Kurt was occupying his space at the table. He had his right arm in a sling, and sometimes Gerda leaned over to help him raise his cup to his lips.

Otávio was talking a lot, recalling that the anniversary of his return to Brazil from the war was approaching.

“It was a day like this, sunny,” he mentioned, staring at the pattern on the tablecloth.

Amália was making her rounds of the table, asking if anybody needed anything, dissembling and stealing chances to wink at me ­furtively. The night before she’d remained for hours sitting on the ground, leaning against the bed: it was raining, there was a leak, the whole shed damp, and Amália, nude above the waist, told me that Gerda had cancer—she and Kurt had already gone to Rio de Janeiro a few times to see a famous doctor, one time Gerda stayed there for weeks, checked into a clinic—I told Amália that out here with her I didn’t want to hear anything about illness, and I went to her and started licking her breasts, sucking, started unbuttoning my pants, asked her to touch me, and she touched me, a drop of rain got through the shaft in the roof and wet my nose, I was about to cum in her hand, her breasts seemed very full, swollen, I was afraid she was pregnant, but my dread lasted only a second, and then I returned to sucking and biting her two breasts, because I remembered it had been a long time since I came inside her, so I could keep on sucking and biting her two breasts with peace of mind, the rain drumming on the zinc way up high, and suddenly Amália let out a yell, and shouted, murderer, murderer, twice, and I, who was wrapped in her arms, got up, took her hand, and saw deep in her eyes a sign of alarm, but concluded that I didn’t feel like deciphering it.

I passed Kurt in the hallway, and for the first time he showed me a real smile. What’s happening? I asked myself, what am I doing that would make him so decisively happy?

I left the manor and went through the surrounding fields, racking my brains to see if I could understand that smile: What trait could bring such a pleasured look to his eye? I needed to discover what it was so I could broaden my access to this strange benefactor.

I sat on the highest part of the low hill and looked down to see Amália throwing things on an enormous fire—papers, cardboard boxes, wood, broken springs—it was making a lot of smoke, and I got down low so that she wouldn’t be able to see me.

I stayed there, lying on my belly in the tall grass, hidden in a war trench, daydreaming that I was entering an unknown world, and that to remain in it I’d need skills.

The strong burning smell left me a little stupid, and into my head leaped the hypothesis that Kurt had set me up, that he’d never give anything up. I turned my belly to the sky, exhaled slowly. Overhead, an airplane was heading south.

Days later I wrote a whole poem in one sitting called “Scenes of War”—the distant stamping, surrounding quake, a hemorrhage running from the nostrils of a boy as he woke.

The poem, written on that paper…even if I slipped away, the poem would still be there, and I thought about how they gave me very little to do besides write poems, and that, until that day, I hadn’t really determined anything about my new situation—in that huge house, surrounded by fields.