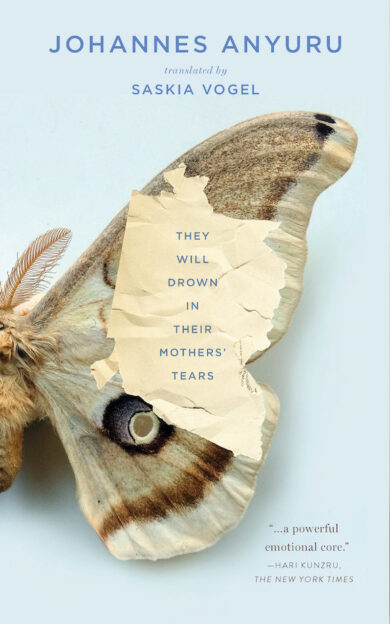 They Will Drown in Their Mothers’ Tears

by Johannes Anyuru
Translated from Swedish by
Saskia Vogel

“[They Will Drown in Their Mothers’ Tears] has a powerful emotional core… Anyuru’s ability to imagine a thread connecting present-day exclusion to future atrocities makes this more than a genre entertainment. He has written a “state of the nation” novel for a country that seems to be losing faith in the civic values for which it is internationally admired.” —Hari Kunzru, New York Times

“It’s a rare author who has such sensitivity with explosive materials…I came away thinking of the book as an attempt to forge a more humane means of expression, one that could surmount all our fears and failures.” —Washington Post

In the midst of a terrorist attack on a bookstore reading by Göran Loberg, a comic book artist famous for his demeaning drawings of the prophet Mohammed, one of the attackers, a young woman, has a sudden premonition that something is wrong, changing the course of history. Two years later, this unnamed woman invites an acclaimed writer to visit her in the criminal psychiatric clinic where she lives. She then shares with him an incredible story—she is a visitor from an alternate future where any so-called “anti-Swedish” citizens are forced into a horrific ghetto called The Rabbit Yard. As events begin to spiral and the author becomes more and more implicated in this woman’s tale, he comes to believe the unbelievable: she’s telling the truth.

A remarkably intense, beautifully wrought tale that combines the ingenuity of speculative fiction with today’s harsh political realities, They Will Drown in Their Mothers’ Tears catapults Anyuru to the front ranks of world writers.

“[They Will Drown in Their Mothers’ Tears] has a powerful emotional core… Anyuru’s ability to imagine a thread connecting present-day exclusion to future atrocities makes this more than a genre entertainment. He has written a “state of the nation” novel for a country that seems to be losing faith in the civic values for which it is internationally admired.” —Hari Kunzru, New York Times

“Anyuru underscores the reality that even parallel worlds involve global connections… Each of his characters feels real, whether experiencing friendship and delight or torture and death.” —NPR

“It’s a rare author who has such sensitivity with explosive materials…Saskia Vogel’s translation achieves a difficult balance, nimble yet compassionate. She captures Annika’s mash-up of Western slang and Koranic Arabic, its humor often a relief, and also the more complex contemplations of the writer, poetic and touching…I came away thinking of the book as an attempt to forge a more humane means of expression, one that could surmount all our fears and failures.” —Washington Post

“…an ingeniously plotted work…Anyuru’s dystopia persuades because it is inextricable from the anxieties of his Muslim characters in contemporary Sweden, from disaffected youths who sell hash and flirt with radicalism to imams preaching forbearance in cramped basement mosques. The grammar of their faith, from its rituals of prayer to its reassurances of eternity, offers a means of orientation beyond precarious circumstances—as well as a counterpoint to the nativist equation of birthplace and belonging.”—Harper’s Magazine

“[Anyuru]. . . turns a novel about terrorism, time travel and alternative realities into something even stranger than those things: a philosophical meditation on hope.” —San Francisco Chronicle

“Anyuru doesn’t shy away from asking big questions in this novel, and the result is a searing meditation on some of today’s most unnerving subjects.”—Tor.com

“This is an intricately woven story, written with a wonderfully poetic sense of language…These are scary times, and Anyuru helps us think about that.” —Asymptote

“This novel blends topical societal issues with a speculative literary trope made fresh by being viewed through a powerful psychological lens. Anyuru, a poet as well as playwright and novelist, provides an engaging literary experience, a Möbius strip-like ride-in-time couched in finely-polished language.”—Popmatters

“…a literary outlet for global mourning strengthened by [Anyuru’s] experience as a poet, playwright, novelist, and essayist.”—World Literature Today

“It begins with an assault on a comic book store during an event by a cartoonist who has made jokes at the Prophet’s expense, but where it goes from there is strange, magical, and one of the first books to emerge out of our modern time to touch terrorism the way Vonnegut did war. Anyuru doesn’t shock the mind, but rather force us to ask new questions about what being a spectator truly means.” —John Freeman, Lit Hub

“… They Will Drown in Their Mothers’ Tears is, I assure you, one of the most phenomenal novels you’ll read in this or any year. Its politics are important, but Anyuru’s searing dissection of human beings is far more moving. Do not miss this book.” —Book Riot

“They Will Drown in Their Mothers’ Tears is one of the finest novels I’ve ever read about the nature of radicalization—both of the individual and of societies. There is an inventive and emotionally devastating beauty about this book. That Johannes Anyuru has managed to so precisely capture the metastasis of hatred across time and space shows he is a writer in possession of a ferocious magic.”–Omar El Akkad, author of American War

“This daring novel uses the possibility of time travel to explore challenging and even dangerous topics of violence, political, oppression, and national identity. For all of its violence, for all of his waltz along the precipice of dystopian oppression, for all of the controversy embedded in the story, Anyuru’s novel asks mundane, perhaps even tender question: what does it mean to have hope for the future?”–Josh Cook, bookseller at Porter Square Books (Cambridge, MA) and author of An Exaggerated Murder

“This firecracker of a novel sweeps through themes of political unrest and violence with a propulsive force that readers are pulled along by their shirt collars in a futuristic dystopian marvel. Readers who liked American War by Omar El Akkad or Mohsin Hamid’s Exit West will like this one.” —Matt Keliher, Subtext Books (St. Paul, MN)

“They Will Drown is a treasure. In the face of white supremacy’s annihilating emptiness, Anyuru holds his characters lovingly, with understanding and care. And as much as the novel thematizes the impermanence of this life, a fierce commitment to the dunyā suffuses every phrase. This book feels like it’s from a more compassionate timeline. What a blessing it landed here.”–Joseph Ocon, bookseller at Vroman’s Bookstore (Pasadena, CA)

“Johannes Anyuru’s They Will Drown in Their Mothers’ Tears is a firecracker of a novel that sweeps through themes of political unrest and violence with such a propulsive force that readers are pulled along by they shirt collars through this futuristic dystopian marvel. Readers who loved Omar El-Akkad’s American War or Mohsin Hamid’s Exit West will find companionship with this novel and will, with any luck, find hope.”–Matt Kelliher, bookseller at Subtext Books (St. Paul, MN)

“Between the past, the present and future, Johannes Anyuru weaves a novel of powerful elegance, which speaks of the madness we’re approaching and a way, perhaps, of escaping it.” –Le nouveau magazine littéraire

“They Will Drown is a political pamphlet, futuristic dystopia and a personal book of thoughts at the same time. . . . The novel becomes an almost physical experience—a punch.”–Goteborgs-Poste

“In imagining a future already at our doorstep, [Anyuru] describes ‘a Sweden that Sweden had created to purify itself.’ A land where fear and racism justify everything, including the very worst. . . . This disturbing text is discomforting in the face of the dangers of our times. But maybe another look would be beneficial, before it’s too late.”—Livres Hebdo

“[Anyuru] finds his way into the hardest questions of today without backing off, bursting the surface of the paralyzing fear of terrorism.”—Abedet 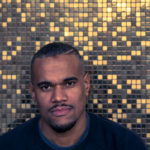 Author
Johannes Anyuru
Johannes Anyuru is a poet, novelist, and playwright. He debuted in 2003 with the critically acclaimed collection of poems Only The Gods Are New. They Will Drown in Their Mothers' Tears was awarded the August Prize and film rights have been acquired by Momento Film. Anyuru's work has been likened to a mix between Nobel Laureate Thomas Tranströmer and a hip-hop MC. 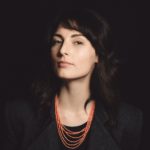 Translator
Saskia Vogel
Saskia Vogel has written on the themes of gender, power, and sexuality for publications such as Granta, the White Review, The Offing, and the Quietus. Her translations include work by leading female authors, such as Katrine Marçal, Karolina Ramqvist, and the modernist eroticist Rut Hillarp. Vogel's debut novel, Permission, appeared in 2019.
Excerpt

I rested my head in my hand, not taking my eyes off the screen, and said, “Sometimes when we meet, I see the great darkness she’s carrying. Like she actually comes from…” I couldn’t finish the sentence.

“The future?” Isra asked, and as she said it, I heard the madness that had crept into me unnoticed.

“Not from the future,” I said. “But from a holocaust.”

“James Baldwin and Audre Lorde were in conversation once,” she said. “Baldwin said something about the American Dream, that both Martin Luther King Jr. and Malcolm X had believed in it, in spite of everything. Something like that. Then Audre Lorde said no one had dreamed about her ever, not once. No one dreamed about the black woman except to figure out how they would eradicate her. When I read the girl’s account I wondered if that’s what it’s like for Muslims in Sweden today. No one but Daesh dreams of us.”

On the screen, Hamad still had his pistol raised. The rain was suspended around him, like silver light, a shattered mirror.

Isra went back to bed, but I stayed put. I wondered what dreams were being dreamed of me.

The Hondo film. I clicked on the sequence where Amin was laughing. Through the balaclava, his eyes looked happy, if touched by madness.

Göran Loberg had seen the images from Abu Ghraib and al-Mima and laughed.

Why was a man standing on a stool with electrical wires fixed to his groin and nipples? Maybe the answer was “Because it was being staged, because someone had a camera.” Maybe the film was reason enough, maybe the film was the precedent for the events.

Why put a dog collar on a Muslim? Why was a man, dressed in a sweat-stained T-shirt, riding a naked Muslim who was on all fours? There’s an answer that allows us to forget the question: These things happened because they thought Muslims were ridiculous. Laughable. On-screen Amin was still giggling, but he was shaking his head and even gently stomping his foot.

First came the unbelievable; then the guffaw.

Maybe that’s what Göran Loberg’s drawings were expressing, and maybe that’s why I experienced them as being so violent, even though they were mere strokes of ink.

I propped my elbows on the table. Felt sullied by the light of the screen. I started crying. I was seized by an incredible longing for Toronto, which I hadn’t visited since my daughter was born. I longed for the city’s chestnut trees, the sycamores in Rouge Park, for my sister, in whose face I could still see Mom.

Amin stared at me from the screen, laughing.

In Abu Ghraib, and maybe also in al-Mima, the victims were forced to partake in the production of the very images that made the violence possible. The gaze was a necessary part of both the torture and the terror attacks. My gaze. I shut my eyes, hard.

A war in which the gaze, our most tender touch, had been weaponized.

Why is a soldier building a pyramid of living people? Why is a prisoner being smeared in feces?

Isra would say that we were living in a time where every stone in the world had witnessed enough human cruelty to burst into shards.

I remembered something the girl from Tundra had written, about how the Rabbit Yard was the place from which they spent all their time looking out at Sweden, and that was why they hadn’t seen the camp. Something like that. The camp had been invisible, because it was right beneath their feet.