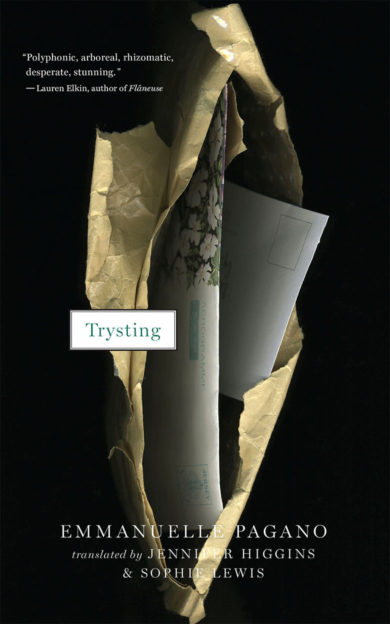 “It’s as though you had to know the password for our relationship.”

What is love? Why do some people make our hearts flutter, while others leave us cold?

“Here it feels as if one love story is told countless ways. It left me feeling the unknowable nature of love and love’s loss. A real pleasure to read.” — Sara Majka, author of Cities I’ve Never Lived In

“Universal, yet utterly personal.… Beguiling and uncategorizable, it celebrates the joys and heartbreaks of being alive.” — Mark Haber, Brazos Bookstore

“Trysting is a mirror shattered in play: inscribed on each bright shard of glass, a fable about a fragment of love.” — Joanna Walsh, author of Vertigo

“Elusive yet familiar.… We recognize ourselves in these words.” — Le Monde

“In fragments, moments, short snippets, Trysting examines the bonds of love, exploring all that unites or separates us.” — Elle magazine

“In this little game of references, it’s the sharp eye of Duras…that must be evoked.” — Le Figaro

Author
Emmanuelle Pagano
Emmanuelle Pagano is the recipient of numerous awards, including the European Union Prize for Literature for her novel Les Adolescents troglodytes. The author of seven works of literature with the prestigious French publisher P.O.L, she lives in Ardèche, France.
Translator
Jennifer Higgins
Jennifer Higgins is a freelance translator and editor based in Oxford, U.K. 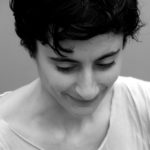 Translator
Sophie Lewis
Sophie Lewis has been translating fiction and other literature from French since graduating from Oxford University in 2004. Following a stay in Rio de Janeiro from 2011 to 2015, she began translating from Portuguese. Her translations include works by Stendhal, Jules Verne, Marcel Aymé, Violette Leduc, Emmanuelle Pagano, Natalia Borges Polesso, and João Gilberto Noll.
Excerpt

He doesn’t like eating anything that still has its skin on. He gets rid of it with his tongue or his fingers before eating whatever’s inside. He scoops out the filling of black pudding, holding the skin down carefully with his fork. Even grapes and figs have to be peeled. I make fun of his fussiness. But I let him get on with it, and my teasing is gentle and affectionate. Sometimes I extract the flesh for him and put it into a little dish, then rinse my fingers.

His son had a birthday party this afternoon, and my son was invited. When we arrived, he was blowing up balloons. He offered me a coffee, which I drank with a few other parents who were still hanging around, and then he sent us all away, telling us to come back and collect our children around five or six o’clock. Yes, he’d cope fine by himself. My son fell asleep in the car on the way home, tired out from the games and full of sweets, the balloons he had been given as souvenirs floating around him. I didn’t wake him up straight away when we got back. I caught hold of a big, bright yellow balloon, pressed the opening to my lips, and let it deflate slowly, breathing in his air.

She and I have been playing a waiting game right from the start. I’m ­always the one waiting and she’s always late. I’ve gotten used to it. I arrive on time because I never know exactly how late she’s going to be. Sometimes just a few minutes, sometimes more, much more. I arrive at the place we’ve arranged to meet and say to myself: here goes. I read. I always bring a book with me but after a couple of chapters I’m already worrying, despite myself. I carry on worrying for goodness knows how many pages.

He had begun his adult life by dying, as many adolescents do, but unlike most, he never stopped doing it. He would die regularly, every two or three years or so, and nothing anybody said or did ever stopped him. After each failed attempt, he would bounce back, rediscover his enthusiasm for life, and meet a new woman. Sometimes it was actually the same woman but they always seemed new to him. As far as he was concerned, it was a complete regeneration each time. With each new life, he was unashamedly joyful. I was one of those new women; the last. During his revivals, he even had children, one with me. He was alive. And then, without showing any signs of it at first, he started dying. His four children were thriving, they loved him, I loved him, he had a good job, everything was fine, and suddenly, just like that, he was dying again. Only to be reborn. As new. You might almost think that he had simply metamorphosed, shed his skin, if it weren’t for all the scars, the traces of his deaths, which were deeper and more numerous each time. He had never taken pills; his deaths were always violent. It was death by hanging, drowning, or shooting. The second-to-last time, he took off the bottom half of his face, but he still got up smiling, smiling without a chin.