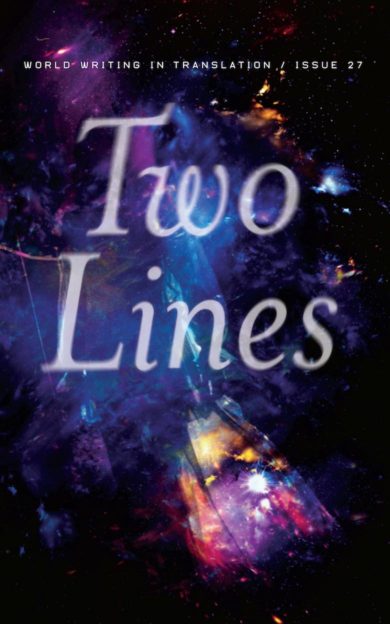 Quietly, I’m opening my head and driving the world out.

Two Lines is, as all publishing is—and especially as all international, literary publishing is—a political act. And many of the poems and stories in this issue touch, obliquely, metaphorically, or specifically, on politics from around the world. And that is something we are alway trying to do: widen the political perspective by including views from all over the world in this, whether you like it or not, irreversibly globalizing age.

Sometimes, though, I need to separate, to unfasten from the seemingly endless theory and punditry and fact-molding. Sometimes the only way to look ahead is to see neither the forest nor the trees, but to climb up a hill and try to see what’s behind the boundaries of the whole mess. And this issue of Two Lines has poems and stories that are no less powerful, no less resisting, and no less revealing by being about an affair, like Ji Yoon Lee and Jake Levine’s translation of Kim Min Jeong’s “Red, an Announcement,” or about caterpillars, like in Simon Pare’s translation of Katja Lange-Müller’s “A Precocious Love of Animals.”

Perhaps it’s naive, but I do believe that if I occasionally “open my head and drive the world out,” it might just seep back in a little more humbly and honestly.