Duanwad Pimwana reads at the Seattle Art Museum May 2 and appears with translator Mui Poopoksakul at the Bay Area Book Festival May 4. 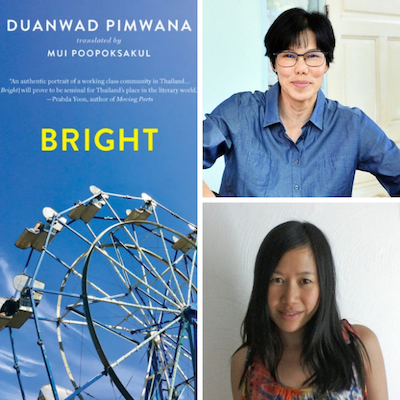 If you’re in Seattle or the Bay Area next week, you’ve got a great chance to hear from the author of the first novel by a Thai woman to be published in the U.S. Duanwad Pimwana is one of only six women to win the prestigious S.E.A. Writes Award, and she’s known for her subtle fusion of magic realism with Thai urban culture.

Translated by Mui Poopoksakul, Bright follows the young Kampol after he’s abandoned by his family. Adopted by the community, Kampol is soon being raised by figures like Chong the shopkeeper, who rents out calls on his telephone and goes into debt extending his customers endless credit. Publishers Weekly called it “an enchanting debut…melancholy-tinged but still exuberant.” The book has also been recommended by The New York Times and Barnes & Noble.

Pimwana’s urban, at times gritty vignettes are balanced with a folk-tale-like feel and a charmingly wry sense of humor. Together, they combine into the off-beat, satisfying, and sometimes magical coming-of-age story of an unforgettable young boy and the timeless legends, traditions, and personalities that go into his formation.

On May 2, the author will visit the Seattle Art Museum to talk about Bright and Arid Dreams, her collection of short stories published by Feminist Press. Full event details and tickets.

On May 4, as part of our sponsorship of the Bay Area Book Festival, Pimwana is joined by translator Mui Poopoksakul and authors Rene Denfeld and Hanne Ørstavik for “The Heart of a Child”. Denfeld is a former chief investigator at a public defender’s office and foster adoptive parent; her novel The Child Finder depicts an investigator using child-savvy skills to find a missing girl. Hanne Ørstavik won international acclaim for Love, which tells of a mother and young son who each are locked in their loneliness; the tragedy is all the more keen when rendered in such gorgeous prose. Details and tickets.

If you can’t make it to these events, you can read interviews with Pimwana and Poopoksakul, and with the translator herself. Or pick up your copy of the book today!