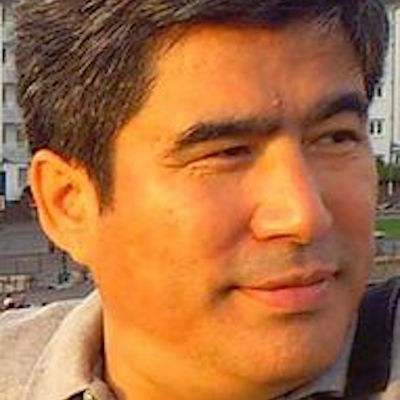 Author, Translator, Arabic, Uyghur
Ahmatjan Osman was born in 1964 in Urumqi, Uyghurstan. His first collection of poems was published in Uyghur in 1982. That year he also received a scholarship to study Arabic literature in Damascus, Syria. In 2004, he was deported from Syria under pressure from the Chinese government, and he settled in Canada as a political refugee. Osman has published eight volumes of poetry, six written in Arabic and two in Uyghur. He has also translated the work of numerous poets into Uyghur, such as Octavio Paz, Paul Celan, Fernando Pessoa, and Adonis. He is recognized as one of the founders and leading lights of the New Poetry movement that emerged in Uyghur literature in the 1980s. His own literary influences range from modernists like Paul Celan and the Syrian poet Adonis to classical Uyghur authors like the eighteenth-century Sufi poet Meshrep. He is the author of eight collections of poetry, published in Syria and Xinjiang. (Photo credit: Phoneme Media)
Journals