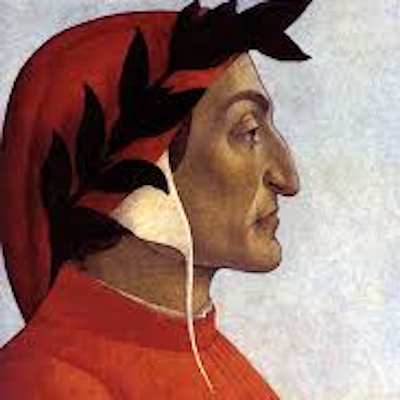 Author, Italian
Durante degli Alighieri, simply called Dante (c. 1265–1321), was a major Italian poet of the Late Middle Ages. His Divine Comedy, originally called Comedìa (modern Italian: Commedia) and later christened Divina by Boccaccio, is widely considered the greatest literary work composed in the Italian language and a masterpiece of world literature. In the late Middle Ages, the overwhelming majority of poetry was written in Latin, and therefore was accessible only to affluent and educated audiences. In De vulgari eloquentia (On Eloquence in the Vernacular), however, Dante defended use of the vernacular in literature. He himself would even write in the Tuscan dialect for works such as La Vita Nuova (1295) and the aforementioned Divine Comedy; this choice, although highly unorthodox, set a hugely important precedent that later Italian writers such as Petrarch and Boccaccio would follow. As a result, Dante played an instrumental role in establishing the national language of Italy. (Photo credit: Telegraph / Portrait by Sandro Botticelli)
Journals