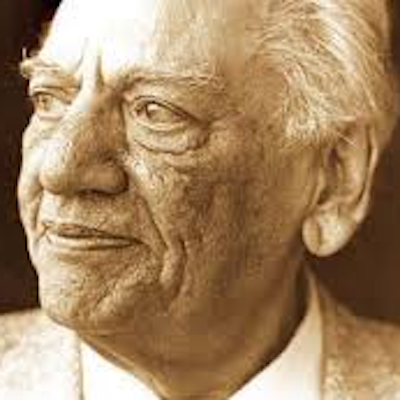 Author, Urdu
Faiz Ahmed Faiz (1911–1984), one the greatest Urdu poets, was born in Sialkot, India, now part of Pakistan. He had a privileged childhood, studying Urdu, Persian, and Arabic. He received degrees in Arabic and English, and began a teaching career after graduation. Faiz’s early poems were conventional, lighthearted treatises on love and beauty, but while in Lahore he began to expand into themes of politics and community. He soon married Alys George, a British expatriate and convert to Islam, and, in 1942, he left teaching to join the British Indian Army, for which he received a British Empire Medal for his World War II service. After the partition of India in 1947, Faiz resigned from the army and became the editor of The Pakistan Times, a socialist English-language newspaper. In 1951, Faiz was arrested by Pakistan’s military government for conspiracy to overthrow the regime. He was sentenced to death and spent four years in prison before being released. Two of his poetry collections, Dast-e Saba and Zindan Namah, focus on life in prison, which he considered an opportunity to see the world in a new way. Faiz settled in Karachi and returned to work as an editor and writer for several distinguished magazines and newspapers. During the 1965 war between India and Pakistan, Faiz wrote poems of outrage over the bloodshed between Pakistan, India, and what later became Bangladesh. However, when Bhutto was overthrown, Faiz was forced into exile in Beirut, Lebanon. There he edited the magazine Lotus, and continued to write poems in Urdu. He remained in exile until 1982. He died in Lahore in 1984, shortly after receiving a nomination for the Nobel Prize. Faiz is especially celebrated for his poems in traditional Urdu forms, such as the ghazal, and his remarkable ability to expand the conventional thematic expectations to include political and social issues.
Print Journals