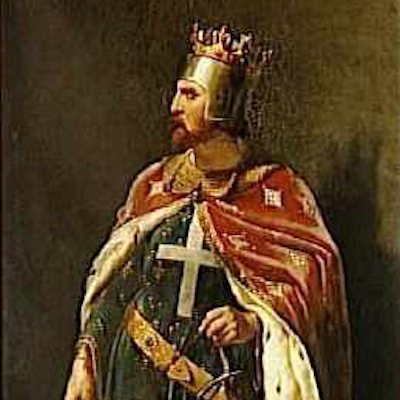 Author, French
Richard Plantagenet (1157–1199) was King of England from 1189 until his death. He also ruled as Duke of Normandy, Aquitaine and Gascony, Lord of Cyprus, Count of Poitiers, Anjou, Maine, and Nantes, and Overlord of Brittany at various times during the same period. Son of King Henry II of England and Duchess Eleanor of Aquitaine, he was born in England, where he spent his childhood; before becoming king, however, he lived for most of his adult life in the Duchy of Aquitaine in the southwest of France. He was known as Richard Cœur de Lion or Richard the Lionheart because of his reputation as a great military leader and warrior. He was also known in Occitan as Oc e No (Yes and No), because of his reputation for terseness. By the age of sixteen, Richard had taken command of his own army, putting down rebellions against his father and serving as a central Christian commander during the Third Crusade. (Photo credit: portrait by Merry-Joseph Blondel, 1841)
Print Journals