Who has not translated Edgar Allan Poe? 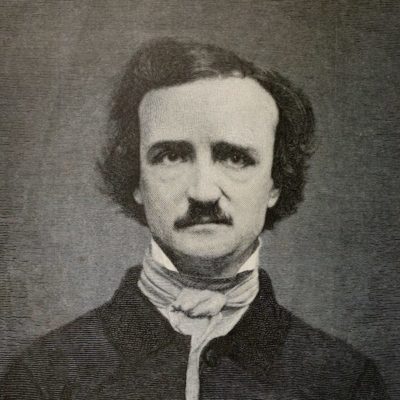 Edgar Allan Poe’s influence abroad is staggering. He is a pervasive force, cited as a major influence by writers from across the globe. This worldwide Poe-frenzy is a phenomenon that asks us to consider what makes a writer so appealing in other languages and literary cultures. Several books are dedicated to answering this question.

By the time Poe died in 1849, translations and summaries of his work had already begun to appear in journals outside of the Anglophone world. Many of the early Poe translations appeared ghostlike, nestled in the pages of literary journals, as if testing the waters.

As early as 1846—when Poe was still alive—a Peruvian journal published an anonymous writer’s summaries of three Poe stories, including “The Black Cat.” These early appearances sparked an interest in Poe that has remained strong more than a century after the writer’s death. Evidently there was something in his voice that excited generations of writers and translators.

Among the countless writers influenced by Poe: Horacio Quiroga, Julio Cortázar, Carlos Fuentes, H.P. Lovecraft, Charles Baudelaire, Franz Kafka, Fyodor Dostoyevsky, and Junichiro Tanizaki. Or to put it another way, in the words of Joyce Carol Oates, “Who has not been influenced by Poe?”

The number of Poe translators is similarly impressive: in fact the list is so extensive that it would far exceed the limitations of a single blog post. Here, though, is a selection, presented in no order in particular. See if you recognize any names.

Charles Baudelaire is considered one of the very first and most important champions of Edgar Allan Poe. He wrote essays praising and theorizing about Poe, all the while characterizing him as a mad genius who shared Baudelaire’s fascination with perversity.

It should be noted that Baudelaire’s seminal Les Fleurs du mal was also published in 1857, and he was most likely working on it while translating Poe. Poe’s influence branched out from there. Baudelaire’s friends and fellow poets Paul Valéry and Stéphane Mallarmé also became champions of Poe, spurred on by their friend’s fervor. Mallarmé began translating Poe’s poetry, including publishing a version of “The Raven” (as “Le Corbeau”) in 1875.

And Baudelaire’s essays and translations of Poe garnered a lot of attention outside of France: in fact, they were often the source material for the early Poe translations into Spanish, Romanian, Russian, and Japanese, among others.

Arno Schmidt was hugely influenced by the works of Poe. Though several translations of Poe existed in Germany as early as 1846, it was Arno Schmidt and Hans Wollschläger’s massive translation project, published as the four-volume Werke, that reignited Poe’s fame in Germany. The translation project lasted from 1966 to 1973 and demonstrated both translators’ unwavering dedication to the American writer.

Schmidt also took Poe as the subject of his most famous work, Bottom’s Dream, translated last year by John E. Woods. The protagonist of the 1,496-page, thirteen-pound book is a Poe enthusiast and the book is, in the words of the New Yorker, “dedicated almost entirely to applying a Freudian theory of language to the works of Poe.” That’s a lot of Poe!

Portugal’s leading modernist writer discovered Poe while studying in South Africa. Poe had already been translated into Portuguese by many impressive people by the time Pessoa came across him. The hugely important Brazilian writer Machado de Assis, for example, had been an early admirer of Poe, and was one of the few at the time who could read Poe in the original English, not merely in Baudelaire’s French translation. (Machado de Assis became the first person to translate “The Raven” directly from English to Portuguese in 1883.)

And yet Fernando Pessoa’s dedication to Poe over the course of his lifetime is astounding; his personal papers are littered with references to the American writer. Pessoa notably spent twelve years working on his Portuguese translation of “The Raven,” which he published along with translations of Poe’s “Annabel Lee” and “Ulalume” in the journal Athena between 1924 and 1925.

Raichō was a poet, journalist, and pioneering Japanese feminist who founded Seitō, the first all-female literary magazine. The magazine became more and more political as the feminist movement grew, covering issues such as female sexuality and abortion.

But before that, in 1911, it was where Raichō published her translation of Poe’s “The Black Cat.” Though a handful of Japanese translations of this story existed already, dating back to Aeba Koson’s version in 1887, Raichō created her own unique version and spread Poe to her community of dedicated readers.

Romanians took very quickly to Poe, particularly his prose, after discovering him through Baudelaire’s essays and French translations. While several translations into Romanian appeared in the nineteenth century, it was Symbolist and modernist poet Ion Vinea (the pseudonym of Ion Eugen Iovanaki) who spurred a wave of interest in Poe with his more modernized translations. Vinea translated over twenty-five of Poe’s stories, as well as Poe’s only novel, The Narrative of Arthur Gordon Pym, which he published in 1963 as part of a book of selected writings by the American writer, Edgar Allan Poe: Scrieri alese. The book was a major success, and prompted more translators to take up the task of translating Poe into Romanian.

I know, technically this makes two notable writers. But since the two Argentines worked so closely together, and enjoyed a lifelong friendship, I’m lumping them together at number six.

Together they translated Poe’s “The Facts in the Case of M. Valdemar” and “The Purloined Letter” in the early 1940s, and they reprinted them in several of the anthologies that they published together, including an anthology of the best detective stories. Borges, as a master of the short-story, was understandably interested in Poe. And this interest took him beyond merely reading stories: he wrote analytic essays on Poe and referenced his work in numerous interviews. Borges also translated excerpts from Poe’s novel, The Narrative of Arthur Gordon Pym, this time independently.

Some scholars have pointed out that Borges and Bioy Casares significantly altered Poe’s writing, removing passages and smoothing out the language in an attempt to “improve” the work in the Spanish. Does this mean that the result was a kind of mutated work, co-authored by Borges, Bioy Casares, and Poe? The boundaries seemed to have blurred here. What is clear is that Borges and Poe shared an affinity for the detective story, and both were masters of narratives that nosedive into the philosophical and metaphysical realms.

The Symbolist poet dedicated decades to translating Poe’s work. Before his own career as a poet took off, Balmont spent years translating seminal works into Russian from several different languages. In addition to Poe, he translated Walt Whitman, Pedro Calderón, and the complete works of Percy Shelley.

He is probably most famous for his Poe translations, however. It seems that Balmont identified deeply with Poe, or at least with the reputation of Poe as a poète maudit, unhinged and brilliant. He had read Baudelaire’s essays on the American writer, and according to scholars who analyzed his 1895 translation of Poe, Balmont translated from Baudelaire’s French translations rather than from the original English text.

Kim was a poet, novelist, and extremely prolific translator. She was also an early—if not the first—proponent of Poe’s work in Korea. In fact, in the introduction to her 1922 translation of Poe’s “The Assignation,” she criticized the Korean literary community for not paying more attention to his work. She also translated several poems by Baudelaire and Poe, classifying both men’s work as “Satanic” in nature. She advocated for more of this kind of writing in Korea.

Cortázar was a huge proponent of Edgar Allan Poe. After first reading Poe at the age of nine, he became enthralled with his haunting stories. Poe continued to be a dominating influence in his life and, in 1953, a Puerto Rican publisher accepted Cortázar’s request to translate Poe’s complete works. So, Cortázar and his first wife, Aurora Bernárdez, left Paris to spend the year in Italy so that Cortázar could focus on the task. The resulting book, Poe’s Obras completas, was lauded by critics and remains one of the most popular Poe translations in Spanish today.

Cortázar also translated Defoe’s Robinson Crusoe and a novel by the French writer Marguerite Yourcenar. And yet Poe seems to have been something like an obsession for Cortázar. If you read Cortázar’s eeriest short stories you can feel Poe radiating from their core.

Although Edgar Allan Poe’s life ended prematurely at age 40, the impact of his short career continues to resonate around the world more than a century and a half after his death.