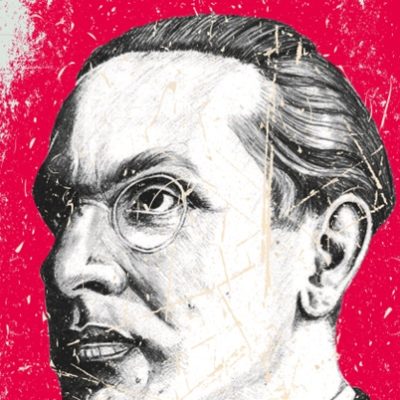 Thirty years ago, my former professor commissioned me and another graduate student to translate all the founding documents of Italian Fascism. The project unfolded during the fog of my dissertation and late nights devoted to the launch of Two Lines, so when I recently decided to revisit the resulting book, The Primer of Italian Fascism, the details were pretty fuzzy in my memory. As I flipped through the early tenets of Fascism we had translated, I was horrified by how many of them reminded me of ideologies espoused by chief Trump-whisperer Steve Bannon and other Trump cabinet members. One surprisingly relevant treatise bore this unlikely title: “Pagan Imperialism: Fascism before the Euro-Christian Peril” (1928) by Julius Evola. Apparently translated by me.

Meanwhile, I discovered Julius Evola creeping into our current political news cycle: the New York Times reported that Steve Bannon had been openly referencing Evola in speeches, in which he described the Italian poet-turned-philosopher as the founder of “what’s called the Traditionalist movement, which really eventually metastasized into Italian Fascism…” Speaking at a conference focused on poverty where he laid out his global nationalist vision, Bannon praised the Traditionalist movement, “particularly…where it supports the underpinnings of nationalism…. [S]trong nationalist movements in countries make strong neighbors,” and at the same time dismissed concerns about racism in such far-right movements, assuring questioners that the racist element “all gets kind of washed out.” Bannon also praised Vladimir Putin—a deeply committed Traditionalist who cites Evola as his inspiration—for “standing up for traditional institutions, and… trying to do it in a form of nationalism.”

But these statements themselves weren’t what most troubled me. Rather it was the ominous tone of Bannon’s language. In the same 2014 speech, Bannon used the word “metastasized” six times and repeatedly spoke of coming doom apparently triggered by the “barbaric” twentieth century: “I believe that, you know, hundreds of years from now when they look back… This will be looked at almost as a new Dark Age;” “see what’s happening, and you will see we’re in a war of immense proportions”; “we are at the very beginning stages of a global conflict,” “a very brutal and bloody conflict.” The New York Times described Bannon as seeing history “in cycles of cataclysmic and order-obliterating change.”

It was this apocalyptic tone that brought me back to the writings of Julius Evola, the man that white nationalist and alt-right leader Richard Spencer hailed as “one of the most fascinating men of the 20th century.” Rereading Evola’s work now, I only have a vague memory of having encountered the rantings of a pagan-imperialist-fascist Dada poet during the course of that project. (Note that these aren’t hyperbolic terms I’m applying retroactively from a twenty-first-century perspective: these are labels Evola adopted himself.) At the time I first encountered his writings, I’m sure I viewed Evola as belonging to some den pretty far out on the fringes, even among fellow fascist theorists. And I dismissed him.

THE MAN BEHIND A MOVEMENT

In his youth Julius Evola, who often wore a monocle and went by the nickname Black Baron, was a talented poet and painter. Though first affiliated with the Futurists, he became a leading exponent of Dadaism in Italy after he returned from World War I. An international “anti-art” movement that arose as a protest against the barbarity of World War I, Dada was led by artists who questioned all conventions and institutions—including those of art. Convinced that reason and logic had led to the horrors of the war and, consequently, that the only road to salvation was the embrace of anarchy and irrationality, Dada artists rejected reason and logic in favor of extravagance, derision, and humor. For Evola, however, the primary appeal of the Dada movement was its rejection of the church and of bourgeois institutions.

Soon Evola left behind experimental art and poetry to become a philosopher and advocate of Traditionalism. In his book Revolt Against the Modern World (1934), he defined “Tradition” in opposition to the “decadence” of the contemporary world, as a spiritual energy made up of “constant factors” that remain unchanged over the centuries: the ideas of Authority, Hierarchy, and Order. He declared himself to be anti-democratic and anti-Christian, and committed to a “justice that recognizes difference and inequality.” His fascist ideology was heavily influenced by German philosopher Friedrich Nietzsche and peppered with esoteric elements from ancient mysticism. (In addition to these central ideas Evola wrote obsessively about the importance of caste, monarchy, racial difference, alchemy, ritual, the occult, and the metaphysics of sex. The writings I translated so many years ago did not include Evola’s views on women, but his extreme misogyny has been discussed elsewhere by Annalisa Merelli. Or you can go straight to the source by visiting the official Julius Evola website where an eagle instructs you to “Honor the Master.”)

All these ideals appealed to Benito Mussolini, but Il Duce also admired Evola’s racial (actually virulently racist and anti-Semitic) writings. After the 1938 Racial Laws restricting the rights of Jews were enacted in Italy, Evola’s views on race began to gain currency. Mussolini so enjoyed Evola’s 1941 book Synthesis of the Doctrine of Race—which promoted a form of spiritual, and not merely biological, racism—that he invited Evola to meet face to face. Evola’s writings—including his contributions to the journal Critica fascista—were supremely influential for Mussolini and the Italian Fascists, as well as for far-right groups and alternative religious circles the world over.

But like many ideologues who inspire fringe movements, Evola himself generally remained an outsider. He never held any official political position, and he never even joined the Italian Fascist Party. Ultimately, Evola would break with the Italian Fascists because they were simply too tame and practical. Evola spent time lecturing in Nazi Germany and favored the character of Nazi SS officers as being closer to his mythic ideal—plus they were more committed to anti-Semitism and Aryan supremacy. In a postwar trial in Italy in 1951, where he was charged with attempting to revive the Fascist Party, Evola denied ever having been a part of the (in his view overly-cautious) Italian Fascist movement. He declared instead that he considered himself a “superfascist,” advocating an even more extreme reactionary position. He was acquitted.

Evola remained active in postwar neofascist circles, and in the 1950s he was adopted as a neofascist intellectual reference point. He was embraced by Italy’s post-Fascist terrorists in the 1960s and 1970s as their intellectual forebear, and it is this influence that has endured and been imported to the U.S.

To get a preview of Evola’s interests (and obsessions), here is a sampling of titles from his extensive list of publications:

IN HIS OWN WORDS

The following quotations are from Evola’s “Pagan Imperialism: Fascism before the Euro-Christian Peril” (1928), which I translated for The Primer of Italian Fascism, edited by Jeffrey Schnapp. All italics are Evola’s.

ON POLITICAL SYSTEMS:
…we must draw the conclusion that fascism is the West’s best hope.

ON WISDOM:
By “wisdom” I mean that power [virtus] that does not allow itself to speak…that manifests itself not by means of arguments and books but through powerful actions. This feeling will breed strong, hard, active, solar, Mediterranean beings; beings made up of force and eventually only of force…

ON SCIENCE:
Science today is profane, democratic, and materialistic. To debunk it we must reawaken…a science that is interior and secret…that taps the occult forces that govern our being and subdues them…

ON LEADERS:
So a race of leaders it will be. Invisible leaders…who act irresistibly and are capable of anything.

ON SOCIO-POLITICAL IDEALS:
To feelings of dependence and lack will be opposed a feeling of sufficiency; to the will to equality the will to difference, distance, hierarchy, and aristocracy. To the mystical communist promiscuity will be opposed firm individuality; to the need for love, happiness, peace and consolation, the heroic contempt for all this and a law of pure will and absolute action.

No more subject to the need to “communicate” and to “be understood” or to fraternal bonds or to the sensual pleasure of loving and of feeling loved as equals. All are subtly corrupting and violent forces that weaken aristocracy and individuality.

ON THE FUTURE:
The world is to be cleansed, returned to its pre-Christian state…in which every instant of life is a heroic event, made up of acts, symbols, commands, magical gestures, and rituals, accompanied by great waves of sound, light, and terror.

THE POETRY OF JULIUS EVOLA

The following selections are my own translations from Evola’s Arte astratta (1920).

Excerpts from “opus 32 – theme and variations”

a rumble moves in a rumble a rumble              come outside (a rumble) look: the stars are dead over the artificial city with no sound

(always that great dark weight in the sky)

(always that great dark weight in the sky)