In Search of Marie NDiaye: An Interview with Jordan Stump

Jordan Stump on the inner workings of Marie NDiaye’s bizarre, scintillating prose, including the forthcoming My Heart Hemmed In. 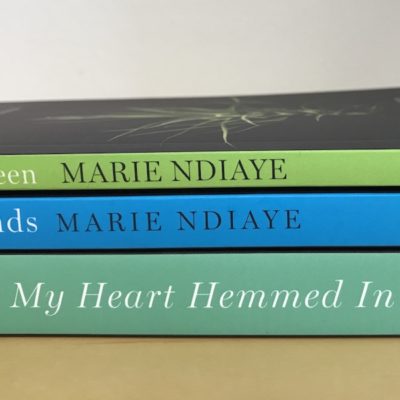 Marie NDiaye was raised by her French mother in the suburbs of Paris and didn’t meet her Senegalese father until she was fifteen years old. At seventeen she published her first novel and in 2009 she won the Prix Goncourt. And yet as little as five years ago NDiaye was virtually unknown in the United States.

In the years since NDiaye has become something of a literary sensation. Jordan Stump’s translation of her short story collection, All My Friends, was followed by the genre-defying Self-Portrait in Green, which won the 2015 CLMP Firecracker Award for creative nonfiction, and Ladivine, published last year by Knopf, was met with critical acclaim.

My Heart Hemmed In is our third book by Marie NDiaye. The novel tells the story of Nadia and her husband Ange, two middle-aged schoolteachers who slowly realize they’re despised by everyone in their community. When a wound mysteriously appears on Ange’s stomach, Nadia desperately tries to save her husband’s life. This leads Nadia on an adventure that propels her out of her small world and into a reality that is deeply troubling and at the same time all-too-familiar.

In preparation for the book’s release next week, I spoke with the award-winning translator Jordan Stump to learn more about the inner workings of these bizarre, scintillating books and the woman who wrote them.

Sarah Coolidge: How and when did you first discover the work of Marie NDiaye?

Jordan Stump: I first read her in the early nineties. I loved the writers being published by the Éditions de Minuit in those days—Marie Redonnet, Éric Chevillard, Jean-Philippe Toussaint, Jean Echenoz—and bought up every Minuit book I could find. The first NDiaye book I read was En famille, and it kind of threw me for a loop: I sort of “got” the other Minuit writers, but NDiaye I wasn’t sure whether I got or not. I kept reading each book as it came out, started teaching her work, and slowly began to learn how to read it. I tried to translate My Heart Hemmed In in 2008 after teaching it in a contemporary novel class, but I gave up after a few pages—I just couldn’t make it sound like what I heard when I read it in French. Eventually I decided I was going to translate NDiaye no matter what, and finally managed to complete a translation with All My Friends. I’m so happy that Two Lines let me go back and actually do the translation I felt like I couldn’t do all those years ago.

SC: How is she regarded in France?

JS: She’s a great star, no question—not one of those sort of ugly media-celebrity writers who suck up all the attention, but a star, respected and (France being France) somewhat controversial, for reasons both political (her decision to leave France after the election of the conservative Sarkozy caused some waves at the time) and literary (partisans of easily-digested pap sometimes complain of the supposed difficulty of her books).

SC: NDiaye is very prolific. You’ve translated her collection of short stories All My Friends; two of her novels, Ladivine and My Heart Hemmed In; and her genre-bending memoir Self-Portrait in Green. How do these different forms lend themselves to her writing? Was one form more challenging to translate than the others?

JS: One thing I love about NDiaye is the certainty of her voice; it’s very “itself,” but you can never quite pin down what it is that makes it itself. It’s instantly recognizable, but it would be hard to name exactly what it is that makes it recognizable. It’s a tone, exactly like the tone of a physical voice. That tone runs through all her writing, in slightly different ways, but it’s a real constant. So I don’t think there’s any real difference for the translator depending on the form or the genre: the difficulty is getting the tone right.

SC: Have you read any of her plays?

JS: All but the most recent one, Honneur à notre élue, which I hear is wonderful, but I don’t think it’s been published yet. I like her plays, but less than her novels—I think I’d like to see one performed before I judge them in any way.

SC: You’ve translated such a variety of impressive French writers, among them Claude Simon, Éric Chevillard, Honoré de Balzac, Patrick Modiano, and Scholastique Mukasonga. How does NDiaye’s French prose compare to that of other writers you’ve translated?

JS: There’s no such thing as a writer who’s easy to translate: no matter what, it’s really hard (and to varying degrees fruitless) work to force words and the ideas they express from one language into another. But there are writers whose style is sufficiently robust, monumental, full-blast, that it doesn’t suffer all that much from even a mediocre translation. Balzac is going to sound like Balzac, even in the hands of a lazy translator. Chevillard, too, is very maniable: you can mess with his sentences, change the phrasing, etc., and it still works. There are other writers whose sentences seem far more precarious, delicately balanced, intricate, easily made flat or banal—or overly poetic, if you go too far the other way. NDiaye is one of those (Modiano is another, in a very different manner).

SC: Have you been in close communication with NDiaye while translating her works? What kinds of things have you discussed with her?

JS: Actually, no. We’ve written, I’ve asked some very basic questions of comprehension, but we have yet to meet. I used to pummel the writers I translated with questions, but don’t anymore, and I don’t think there’s any ideological reason for that: I guess I’m just shyer than I used to be, or more fearful of being a nuisance.

SC: I have to ask—what do you think unites the women in green in Self-Portrait in Green?

SC: What distinguishes My Heart Hemmed In from NDiaye’s other works?

JS: Like so much of her writing, it’s about betrayal, about heartlessness, about incomprehensible meanness. Nadia’s exclusion and persecution and isolation is a sort of archetypal NDiaye situation. At the same time, there’s a sort of happy ending here, which I think marks a change in her writing. Needless to say, that happy ending is riddled with ambiguities, uncertainties, and so on, but in a sense this is the story of someone being cured, much more than it is of someone being tormented.

SC: What do you make of the italicized portions of text in the novel?

JS: Interior monologue, essentially. Which is of course slightly odd: why does a first-person narration need italics to represent the narrator’s private thoughts? Two levels of narration, in a way, creating a sort of dissonance.

SC: Was there a part of the novel that was particularly enjoyable to translate? Particularly challenging?

SC: It’s interesting, I’ve read some reviews that describe NDiaye’s books as tackling the theme of racial identity, while others make no mention of race at all. NDiaye makes only very subtle, very ambiguous allusions to race, usually masked as “otherness”—you really have to look for small clues and read between the lines. What role do you think race plays in NDiaye’s novels? Is this something you had to consider while translating her work?

JS: Yes, that’s a fundamental part of her work: race is always potentially at work in her narratives, but with few exceptions we can never really be quite sure that’s what’s going on. Her earlier books in particular are continually suggesting that they might be read as allegories of otherness or racism, but always in a sort of sketchy, uncertain way. Often I find that my students are irked by NDiaye at first because they don’t understand how they’re supposed to be reading her. Which is exactly the right way of reading her, of course. That (I think) very deliberately maintained ambiguity is essential to her books, and so of course it’s something a translator has to pay very close attention to. The translation has to be just as vague as the original.

SC: I’m always curious why some writers do so well in the international market and others don’t. Why do you think Marie NDiaye has been so successful here in the U.S.?

JS: I think there’s a real hunger, particularly among younger readers, for writers who shake them up, who don’t give them what they’ve been trained to want. There’s so much well-behaved literature out there, and I think people really want books that don’t stick to the rules.

SC: In the past few years translated literature seems to be gaining steam in the U.S. Do you have a theory as to why?

JS: Maybe it’s the same thing as I was talking about with the last question. I think Americans are deeply bored. We’ve managed to drum so much strangeness, individuality, and surprise out of our lives that we’re desperate for something to make us feel like we’re alive. That’s how we got Trump dumped on us. But there’s a far healthier and saner version of that same powerful desire: the desire for newness, new things to see, to question, maybe to understand. And that, I think, is where the recent interest in translation comes from: I think people are realizing there’s more to the world than us.