Keith Donnell Jr., a poet from San Francisco, shares his take on sound, or “found,” translation, a process of translating primarily from sound, rather than meaning. 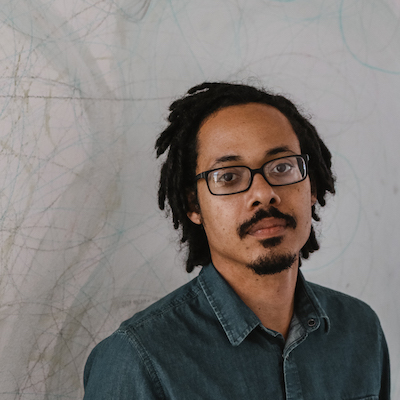 An experimental and largely unpublished form, sound translation bends the phonetic aspects of an existing text and recombines them to create new words and ideas that often radically transform meaning. In an interview with Two Lines Press Editorial Intern Dasha Bulatova, Donnell detailed how he discovered this form in an MFA workshop, and its implications for translation at large.

Notably, sound translation can occur within a single language. For an example, read Keith’s sound translation of The Gettysburg Address, also forthcoming in Best American Nonrequired Reading 2019. Other radical poets, like Louis Zukofsky, have used sound translation to preserve the feel of another language when translating into English.

Donnell’s work highlights how writers wishing to work within one language can nevertheless participate in the art of translation, and challenges translators to think about the “disruptive” aspects of their work.

DB: How did you get started doing “sound” or English-to-English translations?

KD: I’d never heard of a sound translation before taking Andrew Joron’s “Theory of Translation” seminar in my last year of the Creative Writing MFA at San Francisco State. Translation had never really been on my creative radar. But, as I started looking for more opportunities to experiment with my work, I felt the need to think through language function on a more theoretical, abstract level. I hoped that getting a better sense of the discourse around the practice of translation could inform my own poetic awareness. And when Andrew gave us a few conventional, inter-language sound translations, challenging us to do our own, it was just what I’d been looking for—sound translation as an exploration of language/meaning/history within creative constraints as a means to better understand our present moment. I didn’t really have a desire to move between languages. English-based speak is where I tend to nerd out. Because of this, choosing the right source text is an essential part of my process.

What do you feel was the role of your MFA in supporting your translation work?

Without an MFA program, I don’t believe I would have ever attempted a translation of any kind. For me, MFAs are very much about deepening and broadening your craft and, on a broader level, your creative awareness. They’re an opportunity to soak up ideas that one might not encounter in isolation. Concerning the work itself, MFAs are mostly about play—picking seminars out of curiosity—looking for stuff you don’t know much about, but could potentially push, pull, unsettle your creative awareness in productive ways. If you end your MFA program in the same creative space in which you started, you’ve probably wasted your money.

What is your process of creating new words from existing words/sounds? How are you able to also transform meaning in a deliberate and cohesive way?

Honestly, I’m still working to understand my process, which, concerning intra-language sound translation, is still taking shape. I look forward to really chasing it down in future work—continuing to figure out exactly what I’m trying to do, what I’m actually doing, what’s unlocked or exposed within the source text, its relation to the source text, the ethics of it all. I’m not even sure “sound translation” is the best label. I came up with “found translation” on the train the other day, which maybe contains the thing better. The intention of imposing one’s own creative vision on a preexisting work or works—reshaping a previous artist’s vision or intent towards new ends. To pull language from the world around you and generate new meaning with it. You become more aware of the material qualities of language—like clay or stone.

Translations, and sound translations in their own way, often aim to minimize the slippage of meaning that occurs in the movement between languages or forms. Usually to prioritize the original author’s intent, as best it can be discerned, above one’s own, or at least, to give it a good seat at the table. In the translations I create, I’m not trying to minimize much of anything.  Conventional translation often has an ethical dimension to it and this erring towards minimalization is a part of it—thou shalt not betray the source text. But, to a significant extent, I’m actually trying to show-up the source text, to call it out, to critique it. My ethics of translation is centered on disruption and fragmentation, to wreak havoc on a source text and, in the process, to access a shadow meaning, something historical but anti-narrative that speaks to our current situation. Again, my choice of source text is an important part of the ethic.

This being said, I approach the process with a desire to keep as much source sound as possible, balanced against what feels right in the moment. It’s a negotiation between structure and free exploration, improvisational. It’s usually a pretty organic movement and I’m usually surprised by how much original sound I ultimately maintain. It’s part of the challenge. In this way, the cohesive feel isn’t really something deliberate—but more so a product of the writer’s internal system of making meaning. For me, the work becomes a collection of fragmented ideas and images. Those fragments inform the other fragments in the work. And the ideas, images, and references build forward and sometimes cycle back through, creating that sense of cohesion. Although fractured, all the needed pieces are there (kind of like the self). But I wouldn’t call it a super deliberate process.

Language, especially when spoken, communicates meaning on many different frequencies. And I think translators (conventional, sound, “found”) should be interested in exploring these different frequencies of meaning. Sound and found translations just work in frequencies that are oftentimes less apparent to us. Less apparent, but, there nevertheless, and influential to the way we construct meaning, both on the page and in everyday life.

Donnell is originally from Philadelphia and currently lives and writes in the Bay Area. He has an MFA from San Francisco State University and an MA in English from the University of Southern California. He currently works as Associate Acquisitions Editor at North Atlantic Books. He recently completed a sound translation of the first chapter of Huckleberry Finn.