Here’s a look back at a 2015 interview with Isabel Fargo Cole about her translation of Wolfgang Hilbig’s The Sleep of the Righteous. Her translation of Hilbig’s Old Rendering Plant comes out next week, November 7. 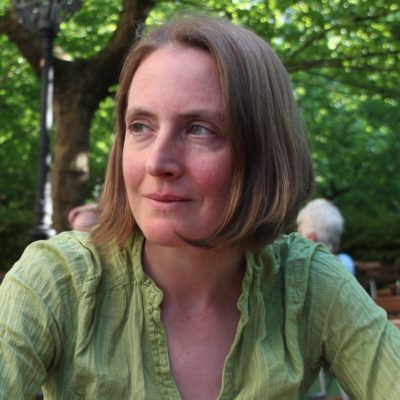 Sarah Coolidge: The stories in The Sleep of the Righteous are set in the uniquely insular world of postwar East Germany. What is it about this world that appealed to you as both a reader and a translator?

Isabel Fargo Cole: I always felt drawn to the East since my first visit to Berlin in 1987, as part of a class trip, when the Wall was still standing – the sense of standing in front of a wall with an inaccessible world of human beings behind it was very powerful. I visited a few more times after the Wall fell, and moved there for good in 1995, studying German and Russian literature at the Humboldt University in the former East. For a long time all my friends were East German, and it was fascinating to hear their stories and try to get a sense of what life had been like. It wasn’t that the world seemed pleasant or appealing, it was just the fact that it was a human reality that we had gotten only a very superficial idea of. In the US you tended to grow up with clichés about people in East Bloc countries being sort of grey, brainwashed robots without any culture aside from crude propaganda. So it was rewarding to discover the richness of human experience in the East (of course including many dark things as well), and the richness of the literature dealing with it. As a translator, I’ve always been drawn to things that need to be unearthed, rediscovered – there’s a special fascination to the process, and a pleasure in rescuing bits of past life and passing them on, even if these bits of life are dark and painful. Perhaps here this echoes Hilbig’s urge to write these stories, to resurrect his childhood and the dark past of this little town, Meuselwitz. And what is resurrected here, or created, is in fact a world unto itself. And as Laszlo Krasznahorkai puts it so beautifully, “Hilbig’s art… is built upon the fact that East Germany is identical to the world.” I think that is what drew me to Hilbig’s writing – the sense of a whole rich world opening up in a seemingly unlikely place.

SC: You’ve said in previous interviews that there are autobiographical elements to these stories. Is there anything you can tell us about Wolfgang Hilbig’s life that might surprise us or add to our understanding of the book?

IFC: To understand “The Memories,” and to a lesser extent the title story, it helps to know that Hilbig’s father had gone missing at Stalingrad, and Hilbig was raised by his mother and her father, Kaszimier Starlek, who had emigrated from the town of Biłgoraj in Eastern Poland before World War I to work in the Meuselwitz coal mines. There’s a point in “The Memories” where the narrator speaks of “the mix of peoples in the chaos of regions Gunsch came from … If you came from there, you were a leftover person, remembered by no one.” This seems to allude to the fact that Biłgoraj was located in a multiethnic region, and one that saw mass population transfers as borders were redrawn following World War II. Hilbig’s Polish grandfather may have contributed to his sense of being an outsider, and to his sensitivity toward the fates of the masses of people who were uprooted during and after World War II. Hilbig was actually known to his close friends as “Kaschi”, taken from his grandfather’s name.

SC: Hilbig wrote primarily about everyday life, though with an underlying force that Lazslo Krasznahorkai, in the introduction to the collection, refers to as “a monster that has not collapsed […] even today it lurks there in the depths, frightening, threatening, dark, just as if it were always there.” In your opinion, what is this “monster” lurking beneath Hilbig’s writing and what was it like to grapple with it as a translator?

IFC: In this passage Krasznahorkai alludes to the specific darkness(es) of Germany’s past – but I am sure that the “monster” is something more universal. I don’t think it makes sense to try to pin it down or put a name to it. Hilbig writes about the horrors of Nazi Germany and the Stasi, but he does so in a way that lifts them out of their historical confines and connects them to other kinds of darkness which he finds in everything from his (ravished) natural surroundings to grotesque, trivial human interactions. This is what makes his writing so disturbing, because the “monster,” whatever it is, isn’t safely confined to some other time or place, or some other person. Readers can also bring their own personal associations to it. Of course it is oppressive to grapple with it over and over when translating, but then there are the flashes of beauty or warmth, and his dark humor, and simply the perseverance of his narrators, that make the experience strangely cathartic.

SC: Several of the narrators appear to be estranged in one way or another from the women in their lives. In “Coming” the narrator is plagued by the suicidal cries of women, and in “The Dark Man” the narrator finds himself in an unloving, strained marriage. What roles do you think women play in this collection?

IFC: The narrators’ relationships with women are typical of Hilbig’s writing as a whole. Either the women are unattainable, or the narrator finds himself embroiled in excruciating conflicts with them. There’s a profound alienation – but then, Hilbig’s narrators are alienated from everyone. Only with the women, though, is this alienation so tormenting, because they are in some ways the fullest human beings in Hilbig’s work, the ones who seem to hold the secret of feeling and decency and vitality. The narrator feels this keenly, but for all his yearning is unable to form a human connection with them, to understand them, avoid disappointing and betraying them; he is not equal to them. He is like an alien confronted with human beings. He is consumed by a love that he can’t express, not even in words, much less in deeds, and this gives him a deep sense of guilt. This begins with his mother, who plays an important role in his writing, but as a rather shadowy, reproachful figure, and extends to his other relationships. Hilbig’s narrators often gaze at women’s bodies, trying vainly to grasp them that way. Described like this, he sounds horribly misogynist, idealizing and objectifying women, subjecting them to the male gaze, etc. – but these scenes, especially the one in “The Dark Man” where he visits his dying ex-lover, are, I find, almost unbearably moving, as he confronts his own inadequacy and a terrible sadness at the gulf that exists between men and women.

SC: Are there any idiosyncrasies in Hilbig’s German prose that were particularly difficult to translate into American English? How did you deal with them in your translation?

IFC: Hilbig tends toward long, swirling sentences broken up, or held together, by ellipses and dashes, a complex stream of consciousness that often stutters or peters out and picks up again. As one blogger very astutely noted, “Like Beckett, Hilbig gets closer than most writers to the actuality of our thought processes, made up as they are not only of a flow of information but with their gaps and misremembering.” Because it is so crucial to the narrative perspective, I have done my best to retain this syntax despite the common wisdom that English-speaking readers don’t like long sentences, but have occasionally broken up the longer sentences if that seemed possible without disturbing the rhythm. It is the obsessive rhythm that carries the reader (and the translator) through the most intense passages.

SC: You also recently translated Wolfgang Hilbig’s novel I for Seagull Books, released this year. What distinguishes Hilbig’s stories from his novels and other writings?

IFC: The blog quote about Hilbig’s syntax above actually refers to “I”, yet applies equally well to the stories. So the fundamental elements of his voice remain the same. But the stories show him much more in his lyrical vein, very dense in atmosphere, with the narrator’s state of mind often conveyed through his vivid impressions of the world around him. Hilbig also wrote poetry, and very short prose pieces that might best be described as prose poems, as well as some outstanding novellas in an equally poetic style. Most of the stories in The Sleep of the Righteous fall toward that end of his spectrum, while “The Dark Man” points toward works like “I”, with a larger cast of characters and a greater focus on plot and dialogue.

SC: What do Germans think of Wolfgang Hilbig today? Is he widely known?

IFC: Hilbig is certainly widely known among German writers, many of whom regard him as one of the most important post-war writers from Germany. As a challenging writer who never made any concessions toward marketability, he never reached a mass audience, but he has a very devoted readership.

SC: You run an online publication called no man’s land featuring first-ever translations of German literature. What inspired you to start the site?

IFC: I started the magazine in 2006 out of frustration at how difficult it was to find publishers or magazines interested in translations. At that point I’d been trying for several years, without results, to find publishers for projects such as Hilbig’s works, and thought I might better put my energy into creating a place to publish German literature in translation. It has been a very rewarding experience, and has helped to pull together a very lively community of literary translators in Berlin (and elsewhere). Actually, this issue will be our last. Thankfully, we are finally seeing a real boom in translation publishing, with new publishers like Two Lines and Seagull, and a proliferation of magazines and blogs. I’m happy to think that no man’s land played some small role in this whole development, but the need for our magazine no longer seems as urgent, I have a lot of translation projects to focus on, and Issue # 10 seemed like a nice place to stop. We may continue it in a slightly different form, though.

SC: What advice do you have for young translators?

IFC: We have some practical tips on no man’s land, under Translators’ Tips. In a nutshell, I would say: 1) Translate what you’re passionate about, not what you think other people want to read. Do a sample and a synopsis and send it around. 2) But clarify the rights situation with the original publisher first! 3) It can’t hurt to reach out to the writer and see if they’d be willing to help you with translation questions. 4) Be very patient.