Let’s Hear It for The Boys: Q and A with Toni Sala and Mara Faye Lethem 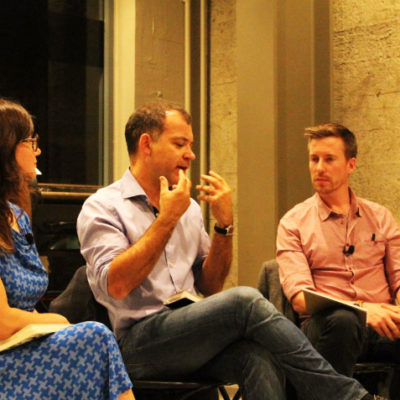 In this interview, Catalan writer Toni Sala and his translator Mara Faye Lethem discuss the latest book from Two Lines Press: The Boys. Among other things, they explore translation, death and sex, and the divide between generations in modern day Catalonia. If you weren’t able to attend our book release earlier this month, you can listen to the audio.

Sarah Coolidge: Mara, how did you discover The Boys and the work of Toni Sala? What were your first impressions?

Mara Faye Lethem: I first remember being aware of Toni because of a book he wrote in the early naughts about Floquet de neu [Snowflake], the albino gorilla. I was also working on a photo essay about this somewhat tragic Barcelona figure. Later I was asked to translate some of his work, which you can see here.

The Catalan original of The Boys was the debut title of a new publishing house called L’Altra, run by a very talented, brave editor named Eugènia Broggi; we were at the party for the Herralde Prize when she told me—almost in a whisper—that she was leaving the big publishing group and starting her own house. I remember thinking what a bold move that was in the midst of Spain’s worst recession ever, and what good news for Catalan literature.

Both that book and his previous one, Provisionalitat, were chosen by the Institute Ramon Llull to feature in their New Catalan Fiction catalogue, which I write for them, so now that you ask it seems like I was hearing about Toni’s work from all sides.

What I’ve always found most striking about Toni’s prose is how his often turbid meditations—on situations that most likely don’t coincide with yours—still end up feeling like the voice inside your head.

SC: Toni, The Boys takes place within a very narrow timeframe. How long did it take you to write the book and what was going on during that time?

Toni Sala: The writing of The Boys was strange. I was stuck for about year in the first chapter, which was initially a short story, thinking that it was over. Then, in the summer of 2013, in three months I wrote the three other chapters. It was very intense. I don’t know if I would have endured many more months at that rhythm. I remember thinking about the book while underwater, while I snorkeled and watched the fishes.

SC: What was it like having your novel translated? Have you read the English translation?

TS: I have not read the whole translation because I get nervous, and I don’t know enough English to draw any conclusion. Just know that if the book works, if a competent reader finds it acceptable, it is thanks to the translation of Mara Faye Lethem. When a book is translated, its benefits are both to the author and the translator. I think it’s interesting that a translation can cross the bridge across languages: literature works like a universal language, a language as accessible to the human condition as music or mathematics.

SC: Mara, you’ve said that you’ve never been to some of the countries of books you’ve translated. You have, however, lived in Catalonia for the past twelve years. Do you think that a deep familiarity with the country of origin produces a better translation?

MFL: I’m of two minds about this question, which is a very interesting one because it addresses both the linguistic and the cultural aspects of working in translation. On one hand, the answer to both aspects is: of course. It certainly can save you a lot of research, and give you a confidence in your interpretation, and more speed, which can help the rhythm of your prose. However, literary language and everyday language do not always have that direct of a relationship. You can be a good translator without having speaking fluency; those are two different skillsets.

I also feel that it is important not to conflate reading literature in translation with some sort of anthropological journey of cultural discovery. A Catalan writer has every right to set his or her book on Jupiter in the 12th century or on Guam in the 25th, thus virtually negating any possible benefits of one’s own personal life experience. Translation always involves research.

SC: In the book, Iona, the fiancée of one of the deceased, is the only main character that knew the dead boys well. Toni, why did you choose to tell this story focusing on those characters on the periphery of the tragedy?

TS: Because the novel is not about the boys, but the traces left by their death. Dying, they shape the personalities of those who remain.

SC: The novel begins with a beautiful image of the highway to Vidreres, where the book is set, littered by prostitutes awaiting customers. What role does sex have in the novel and what is its relationship to death?

MFL: I see sex in The Boys as being closely tied to power, as a means of exchange of capital. This is evident in the case of the prostitutes and also in the ideas of marriage and inheritance that are so central to the book.

TS: Sex can be understood as the culmination of life—reproduction—but clearly, without life death would not exist . . . I’m more interested in the moral side of sex, in what affects the relationship between two people. This is what interested me about the story between the banker and the truck driver with prostitutes, and also about the pursuit of the girlfriend of one of the dead boys by the last character of the book. Sex turns a relationship into something physical. It’s a converter of the soul, a translator. It allows us to see things that otherwise we could not even suspect.

SC: Some of the characters suggest a division between the older and younger generations. For example, Miqui, the truck driver, is annoyed by the old man who recounts his memories of the war. What does history mean to the various characters? Have the traumas of World War II and the Spanish Civil War been, as Miqui suggests, replaced by the trauma of the recession?

TS: Each generation has its traumas. Even the happiest childhood contains traumas. Sometimes I think there is a quota of suffering that everyone must pay, with or without war. This, from someone who has not experienced a war, may be a frivolous opinion. But how can you know, honestly, if you have never experienced a war? One idea that’s very strong in my country in recent years—I do not know if in America, too—is that today’s young generation will be the first generation in many decades that will live worse than their parents—and without a war between the generations.

MFL: The Boys is so evocative of our particular moment in history: overpopulation, poor management of resources, alienation, all of those long overdue bills we’ve been bequeathed by our parents and grandparents. Frankly, I think Spain is better equipped to confront the trauma of the recession than the trauma of their Civil War, but I feel the same way about America.

SC: What’s next for both of you? What are you working on now?

MFL: I’m revising a translation of Eduard Marquez’s La decisió de Brandes (to be published in 2016 by Hispabooks as Brandes’s Decision), translating an Argentine children’s book for Enchanted Lion, and a non-fiction book about the science of sex.

Toni Sala is the author of over a dozen novels and words of nonfiction. In 2005 he was awarded the National Literature Prize by the Catalan government, and in 2014 he received the Premis de la Crítica, Catalonia’s most prestigious literary award, for The Boys.

Mara Faye Lethem’s translations have appeared in The Best American Non-Required Reading, Granta, The Paris Review, Words Without Borders, and McSweeney’s. She is the translator of Papers in the Wind by Eduardo Sacheri, Wonderful World by Javier Calvo, and others.