Shot in the Dark: An Interview with Elisabeth Jaquette

The translator from Arabic talks about being shortlisted for the TA First Translation Prize, how she chooses her projects, and the future of translation. 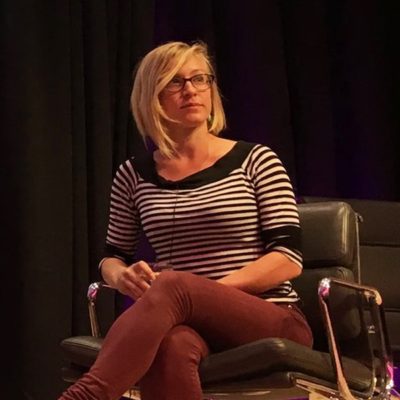 Sarah Coolidge: Congratulations on being shortlisted for the inaugural TA First Translation Prize! This prize in particular honors translators for their first solo book-length literary translation. Can you speak to how you came to translate your first book, The Queue, and what this prize means to emerging translators?

Elisabeth Jaquette: The Queue was a real passion project of mine, one I came across while still living in Cairo. I asked for a book recommendation from an instructor of mine who also worked at a publishing house, and he pointed me to a novel he had just acquired—The Queue—and later introduced me to Basma, the author. I was interested in literature about the 2011 revolution, having lived through it. At the time, most books to do with the revolution seemed consistently celebratory, and this had a very different take: it was a prescient exploration of interlocking systems of power that hadn’t fallen with the regime. I invited Basma to a book club I ran and asked her permission to translate the novel. Then, from Cairo, I sent cold query letters to a long list of independent publishing houses. Melville House was the only one interested, and only if we got the project funded, which it ultimately was thanks to English PEN. I feel very lucky that both institutions took a chance on Basma and myself, a debut author and debut translator pair—especially as The Queue wasn’t just my first book-length translation, it was my first translation of anything!

That shot-in-the-dark story makes me all the more grateful to be shortlisted for the TA First Translation Prize, and highlights how unlikely I think it was for the book to make it into English. It’s also a real honor to share the shortlist with such stellar fellow translators. In particular, Jeffrey Zuckerman’s translation of Eve Out of Her Ruins by Ananda Devi and Eliza Marciniak’s translation of Swallowing Mercury by Wioletta Greg have been two of my favorites books of the past couple of years—and I hadn’t realized they were debut translations. This is the statement I believe the TA First Translation Prize can make: that there’s really excellent work being produced by recent entrants to the field. I hope that awareness can encourage editors to take a chance on emerging translators, and uplift those who do so.

SC: Your most recent translation, The Apartment in Bab el-Louk, is a graphic novel. Did the visual nature of the work impact how you approached the translation? How did this project compare to your first book-length translation?

EJ: By the time I read The Apartment in Bab el-Louk I’d already fallen in love with the visuals. I happened to see the very talented Ganzeer working on the project when I stopped by his studio in Cairo one day, and before reading a word of the text I told him I wanted to translate it. (Perhaps the only advisable part of this story is, that when searching for a translation project, look to readers and collaborators whose taste you respect!) Of course, I wouldn’t have actually taken the project had I not found the text—unconventional, eerie, and poetic—just as entrancing.

The visuals certainly informed the tone of my translation, and also helped me refrain from the temptation of over-explaining moments in the text. As a reader of graphic novels, you absorb some information from the text and other information from the images. There were moments in which, were this a text-only translation, I might have opted for a stealth gloss or filled in some detail that would help the English reader make sense of a scene. But in this case I often chose a vaguer option, which allow the images to play a full role in the narration. In fact, that was often a stronger choice: not to have the text and images conveying the same thing, but complementing each other in building this heady world the narrator inhabits.

SC: How do you decide what projects to take on? Are you working on anything now?

EJ: I’ve been very lucky as a translator, and have worked almost exclusively on projects of my own choosing. Of course, that also means I put in a good deal of work reading for new projects and pitching them around. Above all, I choose books that resonate with me: whether for their style, storytelling, or how they interrogate the world. I also make a conscious choice to translate women writers. The gender disparity in translated literature is well established: according to Chad Post’s calculations on Three Percent, female authors make up 29% of all the translations published over the past ten years. For Arabic, that number is even lower: 23%. I aim to help shift that with my choices as a translator.

As for current projects, right now I’m at different stages on a few: I’m partway through translating a debut novel by Syrian writer Dima Wannous for Harvill Secker. Next after that is Thirteen Months of Sunrise, a short story collection by Sudanese author Rania Mamoun (and one for which we won a PEN/Heim Award), to be published by Comma Press later this year. Finally, Basma Abdel Aziz, the author of The Queue, just released her second novel, and I’m looking forward to diving in. She and I have worked closely together since I began translating her writing in 2012, and I can’t wait to work with her on the next one.

EJ: Absolutely! Rather, I think that community is the future of literary translation, and community can take many forms: a collective like Cedilla & Co., a members organization like ALTA, book groups of dedicated readers hosted by independent bookstores. At Cedilla & Co. we’ve gone through shifting metaphors (as befits a troupe of translators) of what we are and hope to be: a collective, an agency, a toolbox. Ultimately what’s been invaluable for me about the group of incredible colleagues is the sharing of knowledge and advice, supporting and advocating for each other, and celebrating of each other’s work. Translation is a solitary profession, and I think it’s vitally important to our field to create opportunities for practitioners and advocates to come together in person around this peculiar, compelling art.