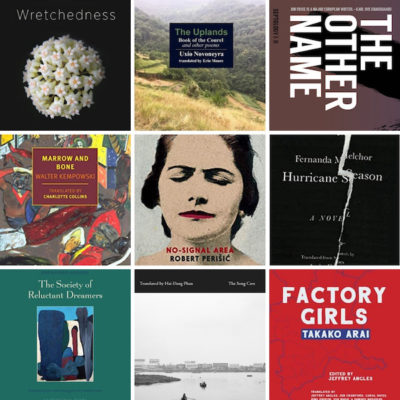 As the coronavirus shuts down travel worldwide and forces us to spend a lot more time indoors, we thought now would be a great time to share Spring translation titles—and a few books that slipped in at the end of 2019—that will let you escape the here and now and go on a virtual voyage.

You can visit Croatia, Japan, Vietnam, and other lands, or consider the politics of translation with this handy list of forthcoming translated books we’re excited about.

José Eduardo Agualusa’s restless protagonist, Daniel Benchimol, spends his dreaming hours interviewing revolutionaries and writers. In this treacherous sleepscape, we find the Angolan anti-communist Jonas Savimbi, Muammar Gaddafi, hunched and hiding in a gutter, and Julio Cortázar as a great billowing tree, speaking to Daniel through an alphabet of clouds. A delicately crafted glimpse into the aftermath of Angolan independence, a postcard sent to prod the illusion of peace and freedom.

This first English-language volume from Japanese poet, performer and publisher Takako Arai collects engaging, rhythmically intense narrative poems set in the silk weaving factory where Arai grew up. Factory Girls depicts the secretive yet bold world of the women workers as well as the fate of these kinds of regional, feminine, collaborative spaces in a current-day Japan defined by such corporate and climate catastrophes as the rise of Uniqlo and the 2011 earthquake, tsunami and nuclear disaster.

In this pamphlet poet and translator Don Mee Choi explores translation and language in the context of US imperialism—through the eyes of a “foreigner;” a translator; a child in Timoka, the made-up city of Ingmar Bergman’s The Silence; and a child from a neocolony.

At the heart of Repetition Nineteen are twenty-five unreliable translations of a poem in Mónica de la Torre’s first book, written in Spanish. She embarked on this new genre-defying project after realizing she had been living in New York for as long as she had lived in Mexico City, where she was born. The works here focus on translation as displacement, mediation, and a form of code-switching.

The Other Name by Jon Fosse, translated from Norwegian by Damion Searls (Transit Books)

Longlisted for a 2020 Booker International Prize, The Other Name follows the lives of two men living close to each other on the west coast of Norway. The year is coming to a close and Asle, an aging painter and widower, is reminiscing about his life. In a town a few hours away lives another Asle, also a painter. He and the narrator are doppelgangers—two versions of the same person, two versions of the same life.

Marrow and Bone, by Walter Kempowski, translated from German by Charlotte Collins (NYRB)

Set in West Germany in 1988 just before the fall of the Berlin War, Marrow and Bone follows Jonathan on an assignment from a luxury car company to travel in their newest V8 model through Poland and write about the route for a car rally. Little does the company know that their choice location is Jonathan’s birthplace. What follows is a darkly comic road trip, a queasy misadventure of West German tourists in Communist Poland, and a reckoning that is by turns subtle, satiric, and genuine.

Set in a Mexican village, Hurricane Season takes place in a world filled with mythology and violence—real violence, the kind that seeps into the soil, poisoning everything around: it’s a world that becomes more terrifying and more terrifyingly real the deeper you explore it.

“A dazzling novel and the English-language debut of one of Mexico’s most exciting new voices.”—The Guardian

The Uplands by Uxío Novoneyra, translated from Galician by Erin Moure (Veliz Books)

Uxío Novoneyra, Galician poet and man of the land, stands with Lorca as a poetic visionary of 20th -century Spain. His œuvre—rich in sound, syllable, silence and gesture—reveals him as an eco-poet before the concept existed. The Uplands, first published in 1955, is his monumental work.

Oleg and Nikola—hustlers, entrepreneurs, ambassadors of capitalism—have come to the town of N to build an obsolete turbine, never mind why. Enlisting the help of former engineer Sobotka, they reopen the old turbine factory, preaching the gospel of “self-organization” and bringing new life to the depressed post-communist town. But as the project spins out of control, Oleg and Nikola find themselves increasingly entangled with the locals, for whom this return to past prosperity brings bitter reckonings and reunions.

“Robert Perišić is a light bright with intelligence and twinkling with irony, flashing us the news that postwar Croatia not only endures but matters.”—Jonathan Franzen, author of The Corrections and Freedom

Paper Bells is a striking new collection by poet Phan Nhiên Hạo depicting his American life as a Vietnamese refugee and poet of exile, translated by poet Hai-Dang Phan. Neither conciliatory nor nostalgic, his plain-spoken style expresses a commitment to memory and history, balancing quiet defiance with a sense of humor and irony, telling the open secrets of Vietnam’s postwar record of reeducation camps, refugee exodus, and cultural amnesia, and giving voice to the everyday lives of refugees in the United States.

Wretchedness, by Andrzej Tichy, translated from Swedish by Nichola Smalley (And Other Stories)

Shortlisted for the 2016 August Prize, Wretchedness is a delirious trip through Europe’s underbelly. With a rhythmic, mesmerising flow, Tichy’s novel explores the possibility of social mobility and the ambivalent desire to escape your origins, asking how to love your neighbour when that neighbour is an addict, a criminal, wretched.

And although it’s not a new book, we’ll also add 2019 Man Booker International Prize winner Celestial Bodies, by Jokha Alharthi, translated from Arabic by Marilyn Booth (Catapult). Alharthi is the first female Omani novelist to be translated into English and the first author from the Arabian Gulf to win the prize.

And for International Women’s Month, you can also check out Words Without Borders’ list of upcoming books of translated literature by women.