“We Should Also Translate the Spirit”: Kiswahili Literature in Translation

Notes on the 3rd Annual Swahili Literary Festival and the translation of African languages. 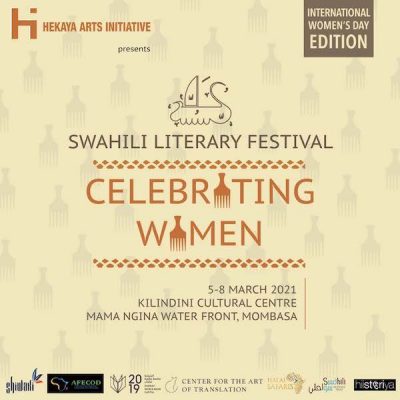 I’m Kelsey McFaul, a PhD candidate at UC Santa Cruz where I study contemporary literature from East Africa. During the 2020-21 school year, I’m working with the Center for the Art of Translation to develop institutional capacity and international publishing support for African literature and translators from African languages. This year we’ve focused specifically on Kiswahili, a language spoken throughout East Africa including Tanzania, Kenya, Rwanda, Uganda, and the Democratic Republic of Congo.

Last month I logged on from Los Angeles to join the third annual Swahili Literary Festival, with a line-up of in-person and online events centered in Mombasa, Kenya. The festival, coordinated by Hekaya Arts Initiative and Abu Amirah, celebrates the literary and cultural production of the Swahili Coast, the area of East Africa’s Indian Ocean coastline where the Kiswahili language originated. The coast is home to long and rich traditions of performance poetry which have developed and inspired countless writers. Coinciding with International Women’s Day, this year’s festival emphasized the role of women in Swahili heritage across space and time.

The festival brought together audiences of elders, academics, writers, and translators on the topics of women in contemporary Swahili Coast literature and the art of translation. Winners of the Mabati Cornell Kiswahili Prize, the first Pan-African literary prize for an African language literature, Anna Samwel and Zainab Bahroon read from their works Penzi la Damu and Mungu Hakopeshwi. Panelists and audience members in these conversations spoke passionately about ways to nurture readers and writers in Kiswahili and other languages like Kikuyu and Kikamba from a young age, as well as the hurdles to publication on the Swahili Coast.

The Center for the Art of Translation sponsored the Art of Translation panel and I helped moderate panelists Aurélie Journo, Edwige-Renée Dro, Madhu Krishnan, Moses Kilolo, and Nathalie Koenings’ conversation on the histories and practices of literary translation on the continent. Drawing on examples from West and East Africa, they deemphasized translation from African to European target languages, and instead made the case for the importance of Africa-centered translation—literary translations of African texts by African translators, often into African languages. One foundational example is audience member Abdilatif Abdalla’s translation of Ayi Kwei Armah’s The Beautyful Ones Are Not Yet Born from English into Kiswahili (Wema hawajazaliwa, 1975).

More recently, Moses Kilolo edited Jalada Africa’s Translation Issue, which collected translations of an Ngugi wa Thiong’o short story in Kikuyu—96 languages and counting! Translators without knowledge of Kikuyu worked from one or more bridge translations in English, French, and Arabic; for example, the Somali translator was most comfortable working from Arabic, so the story was translated from Kikuyu to English, English to Arabic, and finally Arabic to Somali. That’s just one example of East Africa’s dynamic and multi-directional literary culture. Many of the translators I’ve spoken with spend a significant portion of their time translating from English into Kiswahili. Others translate from older or marginalized dialects of Kiswahili into modern, mainstream Kiswahili, or between Kiswahili and Arabic.

While Kiswahili is underrepresented on the global literary scale, it tends to dominate in countries like Kenya and Tanzania where it is a national language. The panelists discussed how East African translators hoping to work in mother tongues other than Kiswahili (Kikuyu, Kikamba, Luo, and others) have few formal educational materials and often find themselves using missionary translations of the Bible to learn the language’s “standardized” form. Yet because Kiswahili and its neighboring languages are characterized by borrowing, malleability, and variation, translators must often navigate whether a “right” version of the language for a particular text even exists, and what their answer to this question might say about their perspective, politics, and taste.

My favorite part of the conversation was listening to practicing translators discuss how they approach their projects and their interaction with audience members about the translator’s craft. While much of our conversation had focused on language, the panelists concluded that a translator moves, not from one language to another, but from one literary text to another, creating again, as best they can, an author’s personal style and voice. The translator asks, as the poet Ibrahim Noor exhorted us all,

“How can I take this idea, this concept, and make my people appreciate the form, the substance, and the spirit of it all? We should also translate the spirit.”