The Order of the Day: A Hands-On Approach to Then and Now

On the latest read at #TheCATBookClub: Éric Vuillard’s The Order of the Day, translated by Mark Polizzotti. 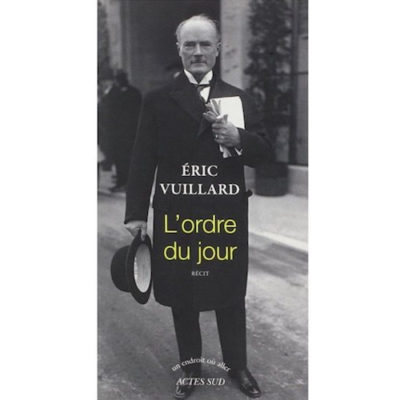 Our involvement with history, much like politics, is a question of proximity. This was the takeaway for me when I was fortunate enough to discuss The Order of the Day with Éric Vuillard in Princeton, NJ. This is not necessarily where one expects to end up when diving into last year’s winner of the Prix Goncourt, the French literary prize that has been handed out annually since 1903. As with the Booker Prize, when one opens the latest Goncourt winner, one expects literary fiction at its finest. After all, the lengthy list is packed full of now-household names: Simone de Beauvoir, Patrick Modiano, Marguerite Duras, Tahar Ben Jelloun, and Patrick Chamoiseau, to name a few; and more recently, Marie NDiaye, Michel Houellebecq and Mathias Énard.

What is a work of history doing on this list of great novels? Is it historical fiction? Not exactly. Truth be told, the Goncourt is not specifically a fiction prize, but is instead awarded each November to “the year’s best and most imaginative work of prose.” And the French have long had at their disposal a hybrid form that doesn’t quite translate into our book-trade jargon: the récit. One of those French terms that drive translators mad. A flip through the dictionaries offers me the following terms in English: story, narrative, account, tale. None of these really conveys its essence. If we need to draw a parallel, the récit is likely closest to our creative non-fiction, or to one of the hybrid terms we’ve seen appear in autobiography now that we’ve grown to distrust it as a genre, such as Salman Rushdie’s nonfiction novel. And yet, the récit is an exceedingly flexible heading in French, malleable to a variety of different intentions.

This designation allows Vuillard to get in nice and close to his subjects. The Order of the Day is not an attempt at objective history, although accuracy remains essential. Nor does it lean too far in the other direction, toward the playful historical imaginings one might find in J. L. Borges or Marcel Schwob, although here we’re perhaps closer to Vuillard’s process. As Schwob put it in his preface to Imaginary Lives, “it is likely best that we no longer meticulously describe the greatest man of his day […] but instead, that we should take the same great pains to relate the unique existences of men, whether they were divine, mediocre, or criminal.” Through memoirs, first-hand accounts, correspondence and photographic evidence, Vuillard brings us up close to the actors who played out these historical scenes, not simply recounting what took place or listing off names and dates but providing these players with enough personality and uniqueness that we can feel these scenes as they unfold, whether it is comfortable to be this close or not.

In Vuillard’s retelling, Kurt Schuschnigg wasn’t just the Austrian Chancellor who capitulated to Hitler during the Anschluss; Vuillard uncrops his photograph to show us a trembling, sweaty, indecisive little man who, after spending the rest of the war imprisoned, turned his expertise in politics into a professorship in political science at a Catholic university in Missouri.  Arthur Seyss-Inquart, the Nazi puppet who took his place, was obsessed with Bruckner; Joachim von Ribbentrop was an importer of champagne, a foodie and a gobbler of macarons; the Duchess of Hamilton was not only a member of the far-right anti-Semitic Nordic League, but a great lover of animals. The human side of historical events is made apparent, too, the swiftness of the Blitzkrieg reframed as a gridlock of broken-down Panzers blocking the advance of the German divisions, much to Hitler’s apoplectic frustration; Hermann Goering laughing away in the dock at Nuremberg over what amounted to an international prank call. The humor is quintessentially French black humor, because none of these events are truly funny, especially not from where we now sit.

Vuillard, not unlike filmmaker Claude Lanzmann, avoids showing us the horrors that took place between the pre- and post-war vignettes he recounts. Nor does he at any point overshoot conspiracy to land in conspiracy theory. Dark humor, he told me, is one way of laying a path forward into the unthinkable and the indescribable. There are enough sign-posts in this short volume to lead us off in any of a dozen directions; if conspiracy theory is what you’re after, simply follow any of these threads, such as the one running from German industrialist Gustav Krupp to American banker and politician John McCloy and on into our day. How far you go is up to you.

If we’re to learn from our history, if we’re to make any sense of the parallels between what happened and what happens, we must follow the paths that lie before us. Which path we choose to follow first doesn’t matter so much, as long as it brings us closer in, allowing us to connect more humanly and more humanely to our shared history, to our fellow citizens, to our elected leaders, and even to the global entities that produce the goods with which we surround ourselves. If we’re to be involved in our own future, it’s time to leave behind the lists of names and dates. It’s time we stop averting our gaze and move up close to see the Schuschniggs sweat.

Join us in conversation with Éric Vuillard tomorrow at the Jewish Community Library in San Francisco.