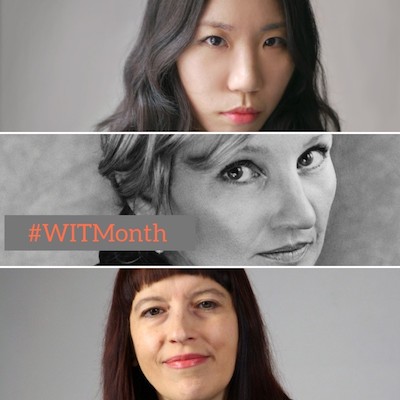 A recent addition to our author list, Kim Sagwa is an amazing South Korean writer whom we debuted in English with her novel Mina (translated by Bruce and Ju-Chan Fulton). Don Mee Choi calls her “South Korea’s young, brilliant, fearless writer,” and Kirkus and Booklist gave Mina strong praise.

We published a second book from Kim in February–b, Book and Me (translated by Sunhee Jeong). Whereas Mina is a heart-stopping, macabre, grippingly realistic tale of the high-pressure teenage world in South Korea, our second book from Kim is closer to Young Adult fable. Kim is a true original, and we’re very glad to have her with us!

Booklist called b, Book, and Me “raw and piercing, dreamy and surreal…” and bookseller John Francisconi at Bank Square Books said “b, Book, and Me uses the tumult of teenage thinking and feeling to tell a story that readers of every age will savor… It accomplishes more in its 134 pages than many novels double and triple its size.”

Naja is one of our earliest authors and a true Press favorite. She’s a multiple threat, writing in various genres in her native Danish, and she’s celebrated as a poet, essayist, and fiction writer. We published her collection Baboon, which won the Nordic Council Literature Prize (like the National Book Award, and a rare prize for a collection to win). Denise Newman picked up the PEN Translation Award for her fantastic translation of this remarkable taut, intense book.

Baboon was published in 2014 and it’s been one of our most enduringly popular titles, still selling regularly and popping up on lists of recommendations (like this one from summer 2018). The stories here are “relationship stories,” but they’re totally original in their perspectives on these age-old questions, and they’re singular in their strangeness, electricity and energy.

Naja currently lives in New York City, and she’s a growing presence on the American literary landscape. We’re so proud to have been the ones to debut her in this language, and she’ll always have a special place in our hearts.

Lidija Dimkovska is a Macedonian poet, novelist and translator who has twice won the Macedonian Writers’ Union award and who also received the European Union Prize for Literature, among many other awards. She’s been translated into numerous languages, and Dubravka Ugrešić is a fan, writing that “Lidija Dimkovska enriches our contemporary museum of literary wonders with her powerful, grotesque, weird details and episodes.”

We published her EU Prize–winning novel A Spare Life (translated by Christina Kramer), which is about conjoined twins growing up through the transition from communism to democracy during the breakup of Yugoslavia. The book is a vivid evocation of two singular lives, but it’s also a deeply political story about who and how Yugoslavia came apart, and the violence that occurred thereafter.

Authors Katie Kitamura and Sara Nović are both fans of Dimkovska’s epic saga of a novel. It’s a book very much in the maximalist European philosophical tradition of Thomas Mann and George Eliot. It you want a big-hearted, meaty read that you can live with for a while, this is your book!