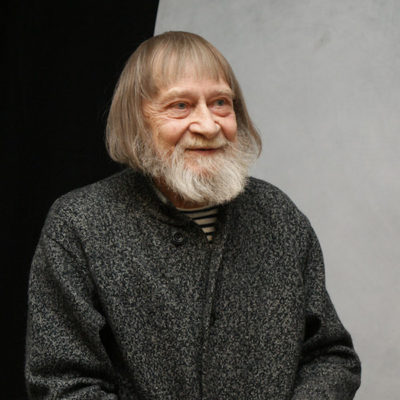 Author, Russian
Mikhail Eremin (Yeryomin) (b. 1936, in the Caucasus) participated in one of the first unofficial post-war Russian poetry groups, the so-called “philological school” of the late 1950s. His books, Poems (1–6), have been published by Pushkinskii Fond. A close friend and associate of Joseph Brodsky’s before his exile, Yeryomin is a playwright and a translator (of T. S. Eliot, Hart Crane, W. B. Yeats, M. Ikbal, and Khushkhal-khan Khattak, among others) who saw few of his poems published in his homeland during the Soviet period. Instead, his work appeared in émigré journals like Kontinent and Ekho. Brodsky wrote this of him: “Eremin is an unreconstructed minimalist. Poetry in essence consists precisely in the concentration of language: a small quantity of lines surrounded by a mass of empty space. Eremin elevates this concentration to a principle: as though it is not simply language but poetry itself that crystallizes into verse….” The first volume of his poems to appear in Russian was published in the United States in 1986, but not until 1991 in Moscow. Each new book is a cumulative edition to, and selection from, his previous work, and each carries the same title: Stikhotvorenia (Poems). A Selected Poems, in the translation of J. Kates, won the Cliff Becker Prize and is available from White Pine Press.   Translations by J. Kates also appeared in Two Lines 16: Wherever I Lie Is Your Bed. Other Eremin poems in Alex Cigale’s translation appear in Two Lines Online Exclusives, Issue 26.   Note: Translators differ on how to transliterate this poet's surname, resulting in more than one version: Eremin or Yeryomin.
Journals